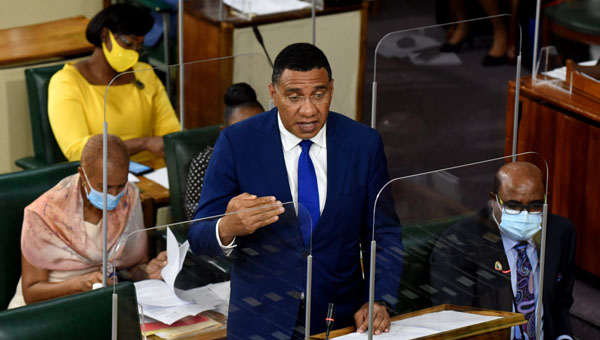 The protocols were crafted by the Ministries of Health and Wellness, Local Government and Rural Development, and Culture, Gender, Entertainment and Sport, working in tandem with industry practitioners.

Holness, who was delivering a statement to the House of Representatives, said that at this stage, the government is contemplating two categories of events – small events with no more than 100 persons in total, including organisers and support personnel; and large events, of over 100 persons.

Small events include outdoor concerts, parties, round robins, festivals, community events, corporate mixers, handover or ground-breaking ceremonies, and other activities of this nature.

“Organisers of small events may make applications for permits, as they normally would, through their local authorities, who will work with them to ensure that the protocols are in place for a safe event. The municipal corporations have agreed to reduce the cost for permits and licences by 50 per cent,” the Prime Minister said.

He noted that for indoor events, held in a covered area with controlled entry, there is a cap on the number of persons who can attend.

“This is determined as 60 percent of useable square footage, not including bathroom or kitchen, divided by 40 square feet, or 100 persons, whichever is lower,” he outlined.

For public-sector events, such as handover or ground-breaking ceremonies, that remains at the maximum number of 50 persons.

As it relates to large events – stage shows, church conventions, conferences or crusades, festivals and related activities – organisers will be required to go through an additional layer of approval.

“Organisers of large events must first send an application to the Ministry of Culture, Gender, Entertainment and Sport. The Ministry will review the application to see that it meets the requirements,” the Prime Minister indicated.

Once the Ministry is satisfied, it will forward the application to the Office of Disaster Preparedness and Emergency Management (ODPEM), which will consult the Health Ministry, the municipal corporations and any other relevant authority, and if they are satisfied, the application for an event to be held at a specified place and time will be approved, he further outlined.

The Prime Minister said that the distinction between small and large events is not based on the nature of the activity, but on the maximum number of persons allowed to be present.

“For example, a wedding with less than 100 persons in total would be a small event, while one with more than 100 persons would need to follow the application and approval process for a large event,” he pointed out.

He added that the same applies to general and special meetings of companies, cooperative, friendly, industrial or provident societies.

Prime Minister Holness told the House that the government will not mandate, as part of the protocols for approval of events, that persons attending must be vaccinated or tested.

“While such protocols would definitely reduce the risk, the shortage of vaccines and the cost associated with testing, would result in a significant burden on the industry at this time. However, if private event holders wish to include such requirements to market their events, they would be free to do so,” he said.

Meanwhile, to provide support to the sector in restarting, the government is prepared to offer certain government-owned venues to the organisers of large entertainment events, rent-free.

Organisers would only be required to cover the operating costs, such as for utilities and security.

The list of venues, so far, include facilities under the management of the Ministry of Culture, Gender, Entertainment and Sport, including the National Stadium complex and the Trelawny Stadium, Fort Rocky and Fort Charles, and the Ranny Williams Entertainment Centre; and facilities under the management of the Port Authority of Jamaica, including the Falmouth Pier and the Port Royal Pier.

The Prime Minister also informed that negotiations are being undertaken, with the local authorities and the private sector, to see how subsidies can be provided for the use of other venues, across the country, as a stimulus for the entertainment industry.

To signal the reopening of the entertainment sector, as well as to demonstrate how a large event could be staged within the protocols, the government will be organising a concert on July 1 at the Port Royal Cruise Terminal.

Further details will be announced by Minister of Culture, Gender, Entertainment and Sport, Olivia Grange.