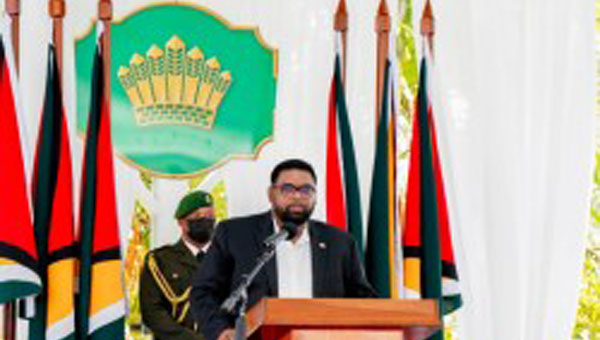 GEORGETOWN, Guyana Thursday, August 12, 2021 — Dr. Irfaan Ali, Guyana’s Head of State, yesterday, highlighted and applauded the “selflessness and commitment” of members of the Diplomatic Corps, in ensuring that democracy was not derailed in Guyana, following the March 2020 elections.

The Head of State expressed gratitude, on behalf of Guyana, during a luncheon to honour the diplomats at the Baridi Benab at State House, at which a large number of Cabinet members, including Vice President, Dr Bharrat Jagdeo, attended.

“It has been just over a year since many of you, who are here, led, with great admiration of the people of Guyana, the Caribbean and the rest of the world, an important battle…to ensure that democracy was not derailed, and to ensure that Guyana will remain in the company of democratic countries,” he recalled.

The President added that Guyana would always be grateful for those, who led, from the front, in defending the principles and democratic values of the country.

These examples, the President noted, have cemented in his government, a commitment to contribute, wherever and however possible, to democracy all across the world.

“We believe, strongly, that democratic values are values that should never be sacrificed; are values that are part of human dignity and human rights; and our commitment to Guyana, is to ensure that, never again, should the people of this country have to experience such moments, when the democracy of the country was tested. So, I want to say to all of you that, be assured, Guyana and this government’s commitment to democracy is unwavering.”

The Head of State also assured those present that his administration is one that is open, transparent and accessible. As such, he expressed the hope that there will be more opportunities, despite the constraints of the pandemic, for a continuous exchange of ideas and a building of relations between the Diplomatic Corps and the government.

“And that is why we wanted this event also. This will be part of the feature of the government: ensuring not only Guyanese have access, but the international community has access, and that we are ready and prepared to answer any questions, any queries, and also to listen to any ideas that you may have,” Dr. Ali promised.

The President noted that he has also made it clear to members of the cabinet that they have to be proactive. As a result, they will be reaching out to create more opportunities for cooperation, to achieve more outcomes and to discuss possibilities.

This, he said, will lead to a better, more prosperous and dynamic society.

“So, today, I just want you to relax a bit, in an environment that you can interact with the cabinet and continue this strengthening of relationships. We value every relationship, we honour every relationship, and we believe that it is only in creating better relationships and understanding, that we can have a better and prosperous dynamic society. So, please convey to your capitals also the best wishes of the Government, and also our prayers for your safety and the safety of the countries you represent, as we navigate another difficult phase of this pandemic.”

In closing, the President used the opportunity to applaud, once again, the outgoing Secretary-General of CARICOM, Ambassador Irwin LaRocque, for his stellar service and stewardship over the years.