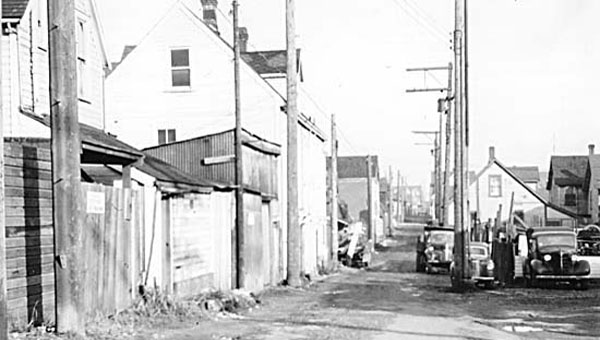 Hogan’s Alley was Vancouver’s first major Black community and continued to grow, as Black immigrants escaped from the United States.

According to Wayde Compton, a Black Canadian writer and historian, “there has been a Black community in Vancouver since before there was a Vancouver”. J. S Matthews, Vancouver’s first archivist, noted that the name “Hogan’s Alley” was in use by 1914.

The first Black immigrants, of African descent, arrived in British Colombia, from California, in 1858, and were later joined by Black homesteaders from Alberta, who originally came from Oklahoma.

Many African Americans had travelled to British Colombia for the Gold Rush, as well as to escape the growing racial tension in California, and some of these folks stayed in Vancouver. Although the racism in the US was intolerable, the racism in Canada was only less intolerable. Upon arrival in Vancouver Black people had only a few options for places to settle.

Black people began settling right near the train station, where many of them were employed as porters. In this area, there was cheap room and board that would accept Black occupants, and also the Pullman Porters’ Club. It is in this area the Black community began to make permanent homes. Not surprisingly, this area was right next to Chinatown.

In its heyday, from the 1930’s to the 1940’s, Hogan’s Alley was a collection of small cottages, Southern-style restaurants and makeshift night clubs, and, depending on your point of view, it was either a den of crime and squalor, or the most interesting and vibrant place in Vancouver.

This cultural hub was home to many restaurants, among them a famous one, called Vie’s Restaurant and Steak House. These businesses often acted as speakeasies, and provided a safe space for the Black community to gather.

It is rumored that such musicians as Duke Ellington, Nat King Cole, Cab Calloway, Billie Holiday, B. B. King, and Louis Armstrong visited this joint in the 1950s, when performing in Vancouver.

In the 19th and 20th centuries, European North Americans held very strong racial beliefs, and racism towards all minorities and immigrants was harsh and sensationalized.

That is to say, the reports and accusations of Hogan’s Alley being a slum, were made by middle- and upper-class White folks, who did not appreciate immigrants encroaching on “their” city.

If they described the Black community as living in squalor, and the residents as criminals, it would only bolster their own preconceived notions about minorities, and would help them attempt to destroy and eliminate their presence.

By the 1940-50s there was growing social concern about the living conditions of the city’s poor. The cabins and houses in Hogan’s Alley were deemed unfit for habitation, and were said to pose health hazards. Social housing ideas were circulating, as were plans to demolish parts of the area. This was in line with the notion of “urban renewal”, which was happening across North America.

“It was the moment that the car culture was hitting North America and people were supposed to live in the suburbs and work in the cities.  The plans involved bulldozing poor neighborhoods, such as Chinese and Black communities, in the name of rational city planning, making space for highways, freeways, and, in the case of Hogan’s Alley, to make way for a viaduct.

Putting a highway “right on top of this small Black community” was an example of “institutional racism, targeting the community that they thought could least oppose them”.

In the 1960’s, the city decided that parts of Chinatown and Hogan Alley would be levelled for a freeway. Many community members saw this as an active attempt to uproot the Black community. Due to resistance from the community, the freeway was never built.

The final destruction of that neighborhood came when the city built the Georgia Viaduct in 1972. The project brought an end to the first and last Black neighborhood in Vancouver.

Since the destruction of Hogan’s Alley, Vancouver has made efforts to recognize the cultural importance of the area, by establishing the Jimi Hendrix Shrine and Hogan’s Alley Cafe.

An interesting and saddening question is, what might have happened to Hogan’s Alley if it had remained the hub of the Black community? Would it have endured as Chinatown has, maybe been akin to Little Italy’s Commercial Drive area, organic and artistic, or something else entirely?

One thing can be certain: by demolishing Hogan’s Alley, Vancouver sentenced an integral community to slowly vanish from memory.