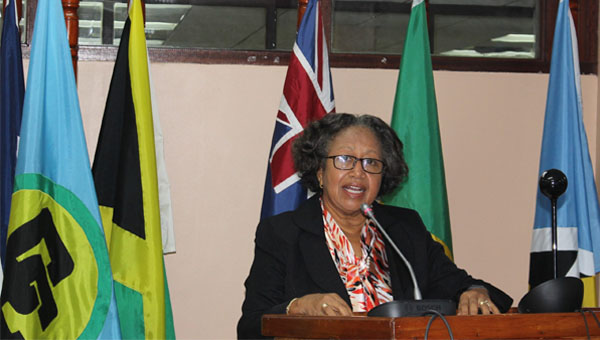 The Chairman of CARICOM, Gaston Browne, Prime Minister of Antigua and Barbuda, welcomed the new Secretary-General and brought greetings from the Conference of CARICOM Heads of Government, which Dr. Barnett also addressed, outlining her vision and indicating some matters that will occupy her immediate attention.

“I take up this position, today, against the backdrop of a devastating earthquake in Haiti, the impact of which will be made worse by the rains, associated with Tropical Depression Grace, which is already affecting the country.

“I reiterate the Community’s condolences to the government and people of Haiti, and to the relatives of those, who lost their lives, in this terrible disaster. I also wish a speedy and full recovery of those, who were injured. Haiti can be assured that the Community will do all it can to assist in this time of national crisis,” the new Secretary-General promised in her address.

She continued: “I begin my tenure with no misapprehensions about the severity of the challenges that our Community faces economically, socially, environmentally and financially. The thrust to build resilience against the existential threat of climate change in all its dimensions, and the urgency of constructing a recovery from the adverse effects of the COVID-19 pandemic demand our continued focused energy.”

She also worked at the Caribbean Development Bank, as Country Economist and Vice President of Operations; and is a long-time advocate for gender-equality, “not only because it is the right thing to do to create a more stable and equitable society, but also because gender equality is good economic policy”.

Dr. Barnett noted that, even as the Community addresses the critical tasks that confront it, “we cannot afford to neglect youth unemployment, which has led the explosion of the jobless in the wake of COVID-19, a troubling rise in crime, especially violent crime in the home and on the streets, the need to strengthen food security, reduce the incidence of non-communicable diseases, and more effectively address the issue of blacklisting by the major industrial countries and the consequential loss of correspondent banking relations.

“All of these affect the lives and livelihoods of each and every one in our Community. It is, therefore, incumbent on all of us to be engaged in finding solutions and taking action to overcome these obstacles in our path to a secure, viable and ultimately sustainably prosperous Community for all.”