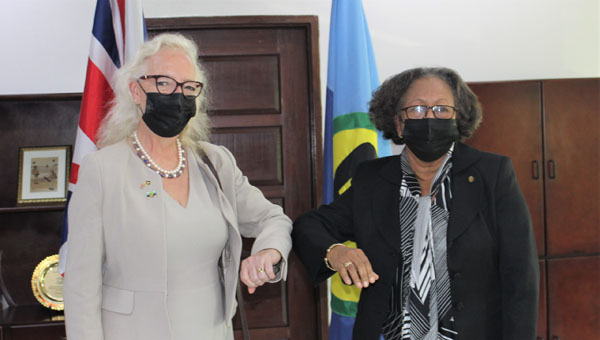 GEORGETOWN, Guyana (Thursday, September 2, 2021) — Climate Change and Covid-19 were the main issues discussed, as Secretary-General of the Caribbean Community (CARICOM), Dr. Carla Barnett, accepted the credentials of the new Ambassador of the United Kingdom to CARICOM, Jane Miller.

During the accreditation ceremony at the CARICOM Secretariat’s Georgetown, Guyana Headquarters, they both agreed on the critical importance to the region, and the wider world, of the upcoming 26th United Nations Framework Convention on Climate Change (UNFCCC) Conference of the Parties (COP 26), to be held in Glasgow, Scotland, in November.

Secretary-General Barnett stressed the need for the voices of the Small Island and low-lying coastal Developing States (SIDS), such as those in CARICOM, to be heard in the discussions, in particular with regard to achieving the goal of keeping global warming to 1.5 degrees.

Ambassador Miller said the UK respected “the powerful voice CARICOM holds, and we will continue to amplify your calls for greater climate ambition”.

She pointed out that “we work with CARICOM on many issues but, perhaps, none as important as the fight against climate change”.

The Secretary-General took the opportunity to thank the UK for its donations of Covid-19 vaccines to CARICOM Member States. This, she said, was vital to assisting in controlling the spread of the virus, and “spurring the economic revival, so urgently needed in our Community”.

Ambassador Miller recognised the “extraordinary efforts” of CARICOM in protecting its people from the ravages of the pandemic; adding “The UK will remain committed to working with our friends, across the Caribbean, in supporting a green and resilient recovery.”