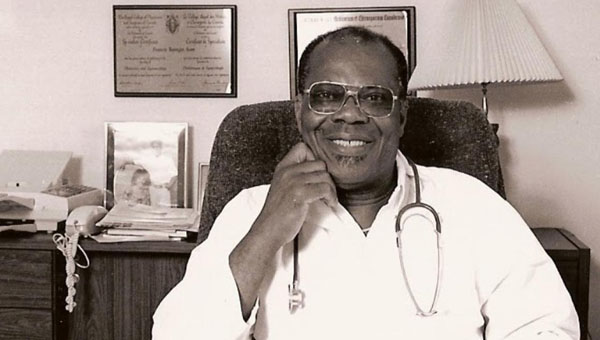 ACCRA, Ghana (Wednesday, October 13, 2021) — Dr. Francis Bainyin Sam passed away suddenly, on Monday, October 4, at the age of 84. He died without suffering, painlessly and peacefully in Accra, Ghana, where he always wished to live out his final days.

Dr. Sam was born in Accra on February 10, 1937, to Emma Mills (Ga of Jamestown, Ghana) and Peter Sam (Fanti of Saltpond, Ghana), where he lived and grew up alongside his 12 brothers and sisters. His proudest achievements were undoubtedly his long career as a physician and building a loving extended family, as well as an international array of friends and colleagues.

Dr. Sam spent his adolescent years at Adisadel Boys College in Cape Coast, Ghana. In 1961, he was selected as one of two Ghanaian Commonwealth Scholars to attend the University of Alberta (U of A) in Edmonton, Canada. During his time as an undergraduate at U of A, Dr. Sam met his ex-wife, Catherine Wright, and together they had his only son, Garth Francis Bainyin Kweku Sam, on September 2, 1964.

After completing his Doctorate in Medicine in 1967, Dr. Sam returned to Ghana and accepted employment as a Medical Officer in the Ghanaian Armed Forces. Enjoying the rank of Captain, Dr. Sam was stationed as a physician in both Accra and Takoradi, which was the start of a 45-year career as a health care professional. Dr. Sam and Catherine celebrated the birth of his first daughter, Lanalee Araba Sekyiwa Sam, in Ghana on May 10, 1969.

In 1972, Dr. Sam returned to the U of A to pursue a four-year residency in obstetrics and gynecology. After completing these Fellowship studies, he relocated to Toronto, Canada and opened his private practice, becoming a pioneer as one of the few African ob/gyn specialists in Canada.

While in Toronto, he met his other ex-wife, Sandra Jane Pennell, and they welcomed two daughters — Tanya Nana Panfua Sam and Tamara Baisua Sam — born on December 13, 1978 and January 7, 1980, respectively.

In Toronto, Dr. Sam established himself as one of Canada’s pre-eminent Black physicians, delivering, literally, thousands of babies and helping countless patients, including many undocumented immigrants, to whom he provided free medical care.

In addition to his role as a physician, Dr. Sam became a strong pillar in the African-Canadian community of Toronto, and established himself as an outspoken leader, alongside many esteemed professional peers and business leaders.

In 1991, Dr. Sam met his beloved wife, Maxine Bailey, who remains his forever companion. He celebrated the birth of his first grandchild, when his daughter, Araba, delivered her son, Shane Alexander McFarlane, on August 27, 2004. 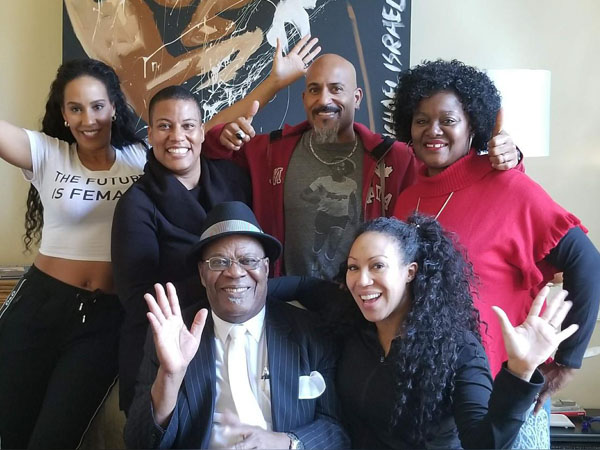 Dr. Sam with his wife, Maxine Bailey (back row, right), and his children. Photo contributed.

In 2012, Dr. Sam retired from active practice, to happily divide his life between summers in Toronto and winters at his home in Accra, Ghana.

Dr. Sam was well-known for his outgoing, generous and larger-than-life personality. He loved social events and was a genial host, who enjoyed bringing people together to share laughter, music, dance, spirited debate and great food. There were very few invitations that he turned down, and few people that he turned away.

For almost 25 years, Dr. Sam’s favorite home on Edenbridge Drive was a dynamic mecca, for not only his immediate family, but also numerous extended family members, friends, exchange students and barely-known strangers, many of whom were welcome to stay there, for months at a time.  Likewise, the home, he established in the suburbs of Accra when he retired, became a wonderfully warm landing spot for anyone visiting Ghana.  It goes without saying then, that Dr. Sam’s longstanding tradition of hospitality will be remembered and missed by many.

On October 25, 2019, Dr. Sam was blessed with the birth of his second grandchild, when his daughter, Tamara, delivered her first daughter, Adeline Frankie Cavon.

In the end, Dr. Sam lived out his last days exactly how he will be remembered most:  as a passionate, generous man savoring his well-earned retirement in his birth country, surrounded by people, who loved and respected him.

Dr. Sam was predeceased by his father, Peter Sam, his mother, Emma Mills, his stepmothers, Martha Sam and Auntie Florence, as well as his siblings, Elizabeth Sam and Augustus Sam, and his cousin, Sarah Mills-Okakoi.

Official Funeral Service: In keeping with his wishes, Dr. Sam will be buried in Ghana and a funeral will be held for him in Accra on Saturday, November 27, 2021. Additional details will be provided as soon as possible.

Toronto Visitation and Celebration of Life: An informal visitation with the family for anyone who wishes to pay their respects, will be held in Toronto on Saturday, October 16, 2021, from 2:00pm – 6:00pm at the Unitarian Congregation Church, 84 S. Service Rd, Mississauga, ON L5G 2R9

In lieu of flowers, the family requests donations to support educational initiatives in Dr. Sam’s name, for underprivileged children in Ghana.