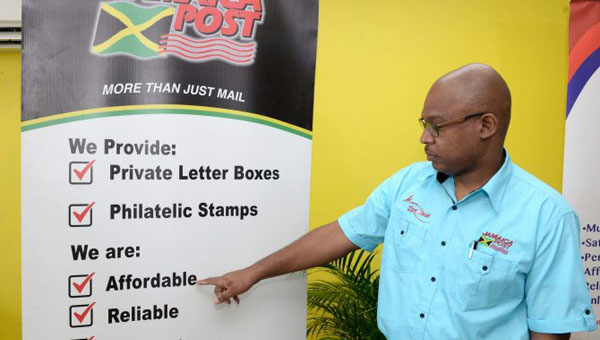 Jamaica's Postmaster General, Lincoln Allen, points to a list of the services, offered by Jamaica Post, at the organisation’s 350 Anniversary Stamp launch, held at the Post and Telecommunications Department in Kingston, on October 29. Photo credit: Dave Reid/JIS.

Plans In Place To Improve Postal Service In Jamaica

He said through its nine strategic objectives, Jamaica Post has commenced the journey to rebrand, retool and reposition the organisation.

“We have started to renovate some of our locations and strengthen our IT (Information Technology) infrastructure. We intend to improve our communication with our stakeholders, with the introduction of a new PBX system, as well as with the strengthening of our customer service capacity, within the department,” he disclosed.

He was speaking at Jamaica Post’s 350 Anniversary Stamp launch, at the Post and Telecommunications Department in Kingston, on October 29.

Allen also informed that the premium service offerings will be enhanced and expanded, as “we invest heavily in building capacity”.

Meanwhile, the Postmaster General said the Department was deliberate in the choice of images depicted in the set of stamps used for the 350th anniversary observance.

“This stamp set provides a glimpse of the past, reflects the present, and signals the future for Jamaica Post,” Allen said.

He added that the set encompasses iconic stamps, depicting the early modes of transportation, employees and buildings, and transitions to a modern era, by portraying the use of modern facilities, such as mobile modes of delivery, upgraded properties, among other things.

In 1671, Jamaica became the first British colony to establish a post office, influenced by the booming sugar industry, and to date, Jamaica Post operates from over 200 locations.