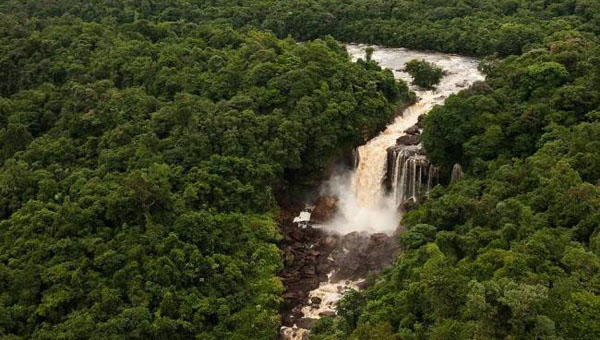 REGION 8, Guyana (Thursday, November 4, 2021) — The best option to begin Guyana’s energy transition to renewable sources was adjudged, in 2016, to be the Amaila Falls Hydropower Project (AFHP), according to a study, commissioned by the government of Norway.

It was the then-David Granger-led administration that agreed to this objective and facts-based assessment of AFHP. The report, compiled by Norconsult, on behalf of the Norwegian Agency for Development Cooperation (NORAD), identified AFHP as critical for Guyana’s energy transition.

“The only realistic path for Guyana towards an emission-free electricity sector is by developing its hydropower potential. The fastest way forward is to maintain AFHP as the first major step for substituting its current oil-fired generation,” Norconsult stated in its report, Review of the Amaila Falls Hydropower Project in Guyana.

This guidance, though unequivocal, was not heeded by the previous administration, and, up to now, most of Guyana’s electricity generation is from the severely polluting heavy fuel oil (HFO).

Upon assuming office in 2020, President Dr. Mohamed Irfaan Ali affirmed that what his PPP/C government was campaigning on, in the lead up to the elections, was a cleaner and diversified energy mix.

On Monday, the Ministry of Finance announced that Cabinet recently granted its ‘no-objection’ for the Office of the Prime Minister to engage China Railway Group Limited to construct AFHP.

The arrangement, according to the ministry’s release, is the Build-Own-Operate-Transfer (BOOT) model, where the company will supply electricity to GPL, at a cost not exceeding US$0.07737 per KWH. The company will provide the entire equity required by the project and undertake all associated risks.

The deal, so far, is consistent with President Ali’s plan to bring the cost of power down to US$0.15 per KWH, or lower.

AFHP, projected to deliver 165 MW of new power to the grid by 2027, will supply a significant share of the power, needed for Guyana’s economic expansion, in the decade up to 2030, building on emissions reduction gains from the 250 MW gas-to-energy project, expected by 2024.

While the government’s endgame is an energy mix, dominated by renewable energy, and 100 percent renewable sometime down the line, Dr. Ali’s administration has decided that it is necessary to bring natural gas from ExxonMobil’s Liza operation to shore for electricity generation purposes, in the interim.

During a press conference at the Arthur Chung Conference Centre, on Monday, Vice President, Dr. Bharrat Jagdeo, explained that it would be more sensible to bring gas to shore, in the early stages of Guyana’s development, to make up the significant demand increase, projected by Guyana Power and Light (GPL) in coming years.

Despite being a fossil fuel, natural gas is the least polluting one. It offers a lesser polluting fossil fuel as a halfway house for Guyana to meet its demand for energy in the interim, while still reducing Guyana’s electricity related emissions, Jagdeo added.

The new government had to revise the target, set by the previous Granger-led administration, which had committed to working toward 100 percent renewable energy sources, by 2025.

In its five years in office, the previous administration implemented no large-scale renewable energy project to commence its abrupt energy transition target.

Dr. Jagdeo has pegged the previous target as unrealistic, and offered that the current government targets a 50% reduction in emissions, related to electricity generation, by 2025; rising to 70% in the years following.

These targets are captured in the government’s recently-launched expanded Low Carbon Development Strategy (LCDS) 2030, and are open for public consultation.