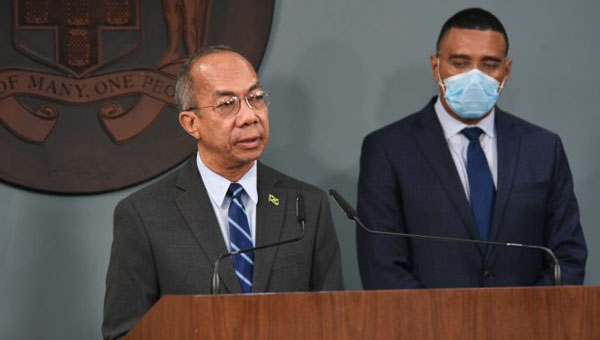 Jamaican Government Using Combination Of Measures To Clamp Down On Crime: Security Minister

KINGSTON, Jamaica (Tuesday, November 16, 2021) — Deputy Prime Minister and Minister of National Security, Dr. Horace Chang, says the government is utilising a combination of security measures to respond to the crime situation in Jamaica.

“Where the violence justifies it, we will always seek to require significant powers, as under the State of Public Emergency,” he said.

Dr. Chang was speaking at a press conference on November 14, where States of Public Emergency (SOEs) were declared in seven police divisions, across the island.

They have been declared in St. Andrew South, Kingston West, Kingston Central, and Kingston East in the Corporate Area, and in the parishes of St. James, Hanover and Westmoreland.

The Minister explained that the SOE is merely one of the tools that the security forces utilise to stem the high rate of homicides, stop the bloodletting and create a space for normal policing operations.

“A State of Public Emergency is a legitimate security measure that provides immediate reduction on criminal violence.  It is a strategic tool that saves lives, reduces homicides, rapidly, and provides reprieve to the families, who live in a permanent state of fear, because of the brutality and brazen actions of violence producers,” he explained.

Dr. Chang noted that the government will continue to invest, strategically, in Jamaica’s security response to crime.

“We continue to prioritise social investment for sustainable crime reduction and social transformation. We will continue to build out the associated services for swift and sure justice, such as forensic, ballistic and pathology capabilities, equipping the police force, and all this is to ensure that the security forces have the required tools to defeat the gangs and win this war,” he stated.

Dr. Chang pointed out that the murder, rate across the southern section of the Kingston Metropolitan Area and in the tri-parish area of western Jamaica combined, has accounted for between 55 and 65 percent of the homicides in areas, where the population is just under 40 percent of the total population.

“For the residents in these communities, these statistics relate to family members, neighbours, sons and daughters, and friends, who were killed by heartless, armed thugs,” he noted.

The Minister said the States of Public Emergency aim to restore some sense of normality for members of the communities, so that they can feel safe enough to walk through their communities, without fear of gang reprisals, so that the children can sleep comfortably and do their homework, without the sound of gunshots.

“The State of [Public] Emergency is for these people, our people, who deserve to live in an environment that is free of criminal violence,” he emphasised.

He noted that between January 18, 2018 and January 31, 2019, when the first State of Public Emergency was declared in St. James, there was a reduction of some 70 percent in homicides and shootings.

“The increase this year, is under a post SOE period, where they have gone up back by 54 percent. The escalating violence and the brutality of the character of the violence cannot be allowed to continue. The state must intervene to protect the citizens,” he asserted.

He added that gang violence has been largely contributing to the upward trend in these murder rates and shootings.

“As a government, we have given our commitment to the people of Jamaica to do what is necessary to break the back of criminal violence in Jamaica. The gangs are heavily armed, and we must provide the security forces with all the tools they need, to undermine, disrupt and remove these criminals from our society,” the Minister concluded.