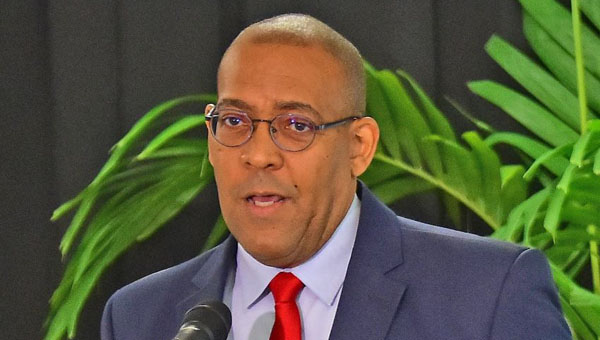 The Minister expressed this view, Monday, while delivering the feature address at the virtual Barbados Sustainability Energy Conference.

He told virtual participants that removing between $400 and $700 million in fuel importation, annually, from the country’s budget, placed the sector in a position to serve as a catalyst for national growth.

Symmonds stated: “The illogic of the pattern of expenditure that I just outlined was vigorously drawn to our attention by an Inter-American Development Bank study, which took place, between 2008 and 2010, in this country. That, in turn, gave birth to Barbados’ Sustainability Energy Framework.”

The Energy Minister recapped the journey from the target, set in 2010, to be 29 percent fossil fuel-free by 2037, to the present revised 2030 target.

“That framework set for us a renewable energy target of being 29 percent fossil fuel free by the year 2037.  By today’s standards, that 2010 ambition is clearly exceptionally conservative. By 2016, the Division of Energy would have benefitted from a further partnership with the International Renewable Energy Agency and this lent us a certain clarity of perspective and, perhaps, the confidence to revise ambitions up, to about 70 percent fossil fuel free by the year 2037,” he told participants, following on social media platforms.

Symmonds continued: “…Subsequently in 2019, this administration issued a policy mandate that we had to move to be 100 percent fossil fuel free, or have a net zero carbon footprint, by the year 2030. Clearly, the speed of this new ambition outstripped everything that we had been thinking about as a country, before, but compelled Barbados to do work that previously would have had to be deferred.”

The Energy Minister commended the Technical Officers in the Division of Energy, who were currently working with the Barbados National Oil Company Limited on switching mechanisms, to assist government with the commercial introduction and supply of biodiesel.

He explained that this move was necessary, in view of the fact that government’s intention to decarbonise the transportation sector, has “simply out-striped the pace, at which the global vehicle manufacturers are going and, quite frankly, can go”.

“As I speak to you, therefore, there are a number of makes, models and types of vehicles, especially in the heavy duty construction sector in Barbados, that have neither a hybrid or electric equivalent.  Barbados is, therefore, ahead of most of the world, with respect to commitments to building out a clean and green transportation sector,” he underlined.

The conference, under the theme: Championing our future to a Sustainable Energy Sector, featured a number of panel discussions, on topics such as: Energy Transition, Electricity Mobility, Wind Energy as an Alternative Energy Source and financing options for the energy sector and a virtual expo and networking session.