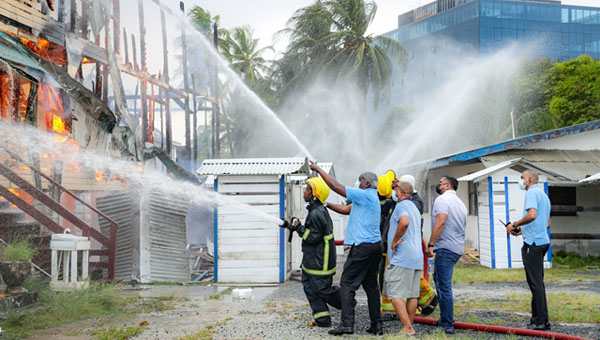 GEORGETOWN, Guyana (Wednesday, November 24,2021) — Major losses were avoided, last Saturday, after quick response from the Guyana Fire Service resulted in a fire — at the Guyana Police Force’s Office for Professional Responsibility (OPR) — being brought under control.

This resulted in the saving of the Office of the Director of Public Prosecutions (DPP), which is housed in the same building, in Eve Leary.

Prime Minister, (Ret’d) Brigadier Mark Phillips; Minister of Home Affairs, Robeson Benn; and Minister of Parliamentary Affairs and Governance, Gail Teixeira, along with several other ministers of government, were on-hand at the scene.

Prime Minister Phillips, in addressing the media, said, “We have been able to save the DPP part of the building. So, the fire service is doing their work and you do not expect, based on what we are seeing here, for the fire to spread, beyond where it is, right now.” 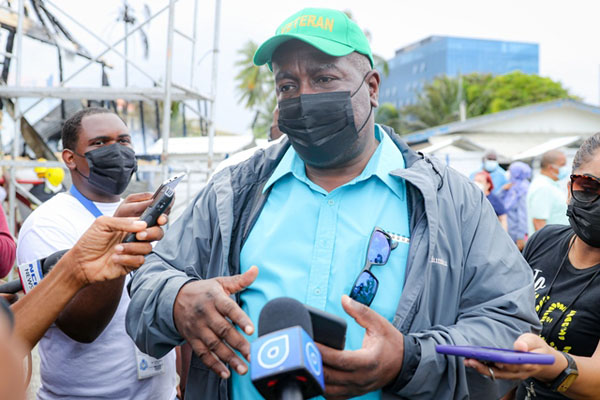 He further added that “the investigation will help us to determine whether it is coincidental, or if there is some other motive or reason behind this fire. So, we need to allow the fire service and the police and law enforcement agencies to do their work… the important thing right now is, that we have the fire under control, not likely to spread beyond this point and the investigation into what may be the cause of the fire has started”.

Minister Benn noted that the fire has placed the operations of the OPR and DPP in disarray. The minister said he believes that Guyana is experiencing a “trial by fire”.

“It appears that a subliminal message is being put around the areas, starting from some fire-technic-minded person in the United States, and maybe, perhaps much more than likely that the incidents we see and the timings at which they occur, are related to those, more than subliminal messages, about Georgetown burning, if the PPP do not do whatever,” Minister Benn added.

“We will stand firm here; we will make sure that the work of our government and the development of our country proceeds,” he stated. 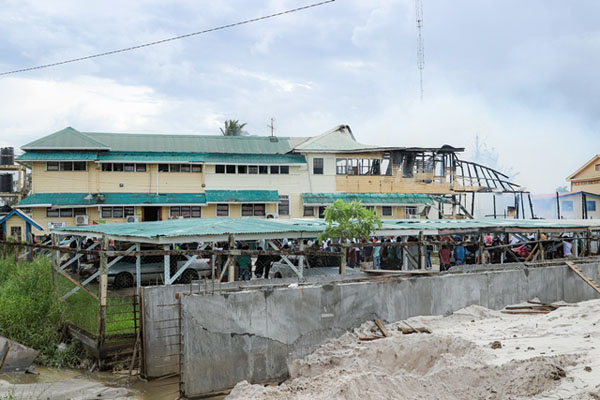 Commissioner of Police (ag), Nigel Hoppie, in an interview, disclosed that, despite the loss of documents in the OPR, the force has always had a backup in place.

“We always have contingency systems in place but, of course, any fire initially would affect us going forward, but together, as a team, we will put systems in place to ensure that it does not hamper our progress in addressing the issues at hand… most, if not all, the cases have connections to several divisions, also, because, as you are aware, we have decentralised Office of Professional Responsibility, that is in every region throughout our country,” he stated. 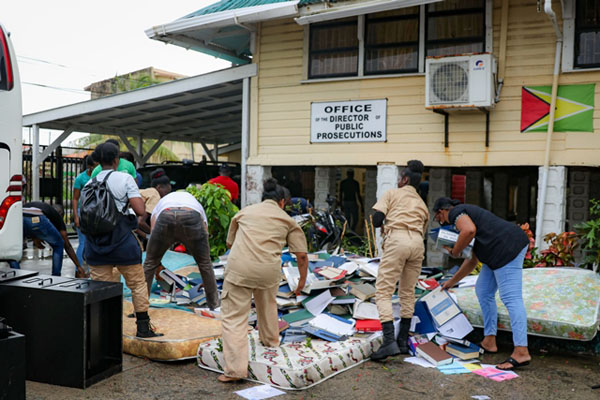 Documents from the DPP’s office being removed. Photo credit: GDPI.

Chief Fire Officer, Kalamadeen Edoo, said the fire service received the call about the fire at 13:50hrs, which saw fire tenders from the Central, Campbellville, Alberttown and West Ruimveldt fire stations responding to the scene.

The building, which was under fire, housed the OPR, the Office of the DPP, Police Headquarters Barracks and the construction section of the force.