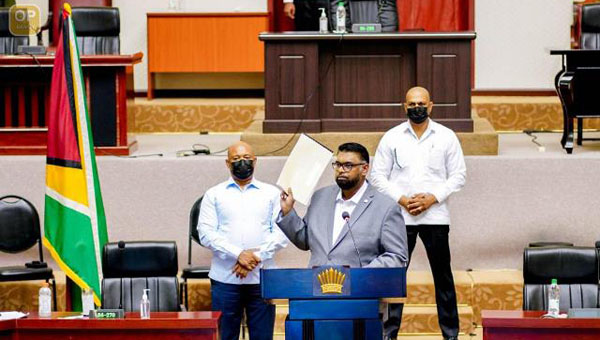 GEORGETOWN, Guyana (Wednesday, November 24, 2021) — Dr. Irfaan Ali charged contractors to expedite their work, but to ensure that quality is maintained, as Guyana continues to go through a revolutionary period of growth and development.

The Head of State was adamant that structure was needed, at all levels and by all stakeholders, since the end result would need to be a quality product for the Guyanese people.

The lengthy, but passionate, address was made at the Arthur Chung Conference Centre (ACCC) in the presence of the Heads of the relevant ministries and government agencies, yesterday.

The President reminded his audience that his duty is to ensure that Guyana develops, at all levels, and that its people are happy with the quality of work and the transparent ways they are executed.

He stated that, at the end of his first term, his government will have to go back to the citizens and that they will “judge us based on our performance”.

He explained that his government’s performance involves, not only the government agencies but also many other factors, including all of the contractors executing projects.

President Ali noted that he and his cabinet have committed to fulfilling the very elaborate and comprehensive mandate of development, and that there is “no way, absolutely no way, we are not going to achieve that mandate”.

“Every ounce of my energy and the cabinet’s energy, and the technicians’ energy, will be at achieving that mandate, in the interest of Guyana and every single Guyanese, and you’re a part of that….The government and all of you in this room, have a professional responsibility to ensure that our plans and programs are achieved.”

“Absolute nonsense for you, and for us, because there is something called economies of scale, and allocation of resources, allocation of material, human financial and material resources. And if you are a tier-one contractor, and you want to spend the time to allocate resources on a $5M project, you will bust. You will not be able to efficiently implement or achieve your outcome.”

President Ali made it clear that he has no problem with contractors having multiple contracts, but he has an issue with there being a lack of understanding, that contracts have to be done simultaneously.

Amended contracts
The President told the contractors that they have to increase their capacity, both human resources and machinery. He noted that some contractors have been working without an engineer on-site, despite having them listed as personnel on bid documents. This, the President said, will be addressed with a new contract and with a clause that will now recognise the qualification of someone, who can sign off on their work.

He also told the contractors that they have to adapt to the culture of investing in night work.

“If you are playing at a certain level, you have to be willing to make the investment to allow you to be competitive and efficient at that level. This is where the country is heading. You have to build your night capacity; otherwise, you will fail.”

Quality of work
He also said that the quality of the project will be comprehensively spelt out in the bid document, and that there will be a clause of what is the contractor’s responsibility for a specified time.  He added that this is necessary for clarity, moving forward.

Demerit system
The President also noted that timely completion of projects is another issue that is important, for both the government and contractors, to address. He elaborated that there will be an assessment of every contractor and project executed, at the end of the year, and that a demerit system would be developed.

“The demerit system is that the net value of outstanding work will be transferred to the new year and will become your net value of work in progress, that would disallow you from having new contracts or a certain level of new contracts. That too will be in the bidding document by agency.”

There will also be a performance-based award system, in addition to the price and technical qualification system that is currently in place.

“There are two ways you address this; the first is that you adopt a winning culture, or the second is for you to stay where you are, be happy and slowly be pushed out of what is happening. To adapt, you have to invest. You have to grow yourself in quality, in equipment and understand what is coming at you.”

President Ali pointed out that the new Demerara Harbour Bridge project alone will require an amount of concrete that would exhaust the country’s current producing capacity. He said that the Amaila Falls Hydro Project would also take a tremendous amount of local resources.

“The government investment program has many different levels, and I am only speaking about infrastructure today. Our national infrastructure transformation is going to set us on a pace and trajectory that is second to none in the world.”

The President pointed out that the development of a four-lane highway, from Busby Dam to Ogle, and then to Cane Grove on the East Coast of Demerara; an expanded four-lane highway on the Corentyne; an industrial estate that will require billions in contractual services; more than 30 new first world schools; more than eight new hospitals, across the different regions; the spending of billions of dollars in hinterland and community roads and other government infrastructural projects will create enormous opportunities for local contractors.

“This is the scale of investment that we are talking about—that you will be a part of. That is why you have to pull yourselves up now.”

Culture change
He noted that for these opportunities to be taken full advantage of, the contractors must have a shift in their culture and thinking.

“Whilst we are developing, we have to start thinking and operating as if we are first world, because, unfortunately, that is how people are judging us. Do not sleep on the development drive. Do not be aloof.” 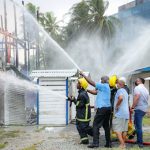