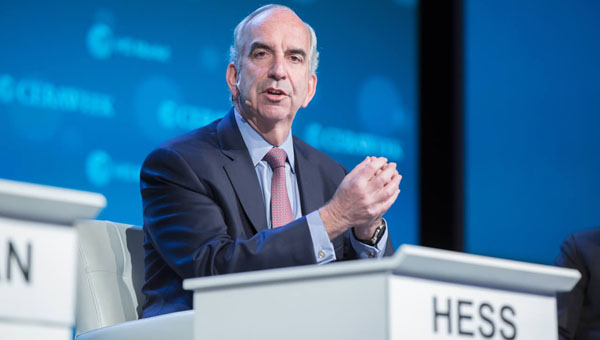 GEORGETOWN, Guyana (Wednesday, November 24, 2021) — Hess Corporation, one of the co-investors of Guyana’s highly-successful Stabroek Block, said Yellowtail, the fourth development project offshore Guyana, is one of the “best projects on the planet”.

Hess’ Chief Executive Officer (CEO), John Hess, reminded his audience that Yellowtail’s floating production storage and offloading vessel (FPSO) has the capacity to produce 250,000 barrels of oil per day, on a gross basis.

“It will be our largest oil development, to date, in Guyana,” the CEO added, “and while its cost will be higher, the resource we are developing is significantly higher; and this development has simply outstanding financial returns, some of the best in the industry, as Greg mentioned, and a break-even cost between $25 and $32 per barrel, Brent. So, it’s outstanding economics. Yes, the costs are higher, but the resource we’re recovering are much higher and these are some of the best economics in the industry.”

Going forward, the CEO revealed that Hess has budgeted a capital US$1 billion for 2022 in Guyana. He recalled that the company came into 2021 with the guide of $780 million for development in Guyana, but that the company is going to come in under that, with approximately US$750 million.

“With Liza Phase two and the continued development on Payara and spending on Yellowtail, we think it’s approximately $1 billion, will be the Guyana capital for the developments next year; so, approximately again, another $250 million there,” Hess said.

The Yellowtail developmental project will be situated 126 miles offshore Guyana, where ExxonMobil made its 13th discovery in the Stabroek block. Its initial production phase is scheduled to commence in 2025, with optimum production capacity of 250,000 barrels per day, and would continue for 20 years. The FPSO (floating production storage and offloading) vessel is designed to have a storage capacity of two million barrels of oil.

The proposed development, according to joint public hearings into the project, between Esso Exploration and Production Guyana Limited (EEPGL) and the Environmental Protection Agency (EPA), could provide some 1,300 jobs, across its four phases.

ExxonMobil has already received approval for three development projects in the Stabroek block, where it has made discoveries, totalling 10 billion oil equivalent barrels.

Of those projects, production began on December 1, 2019, with the Liza Destiny floating production, storage and offloading vessel at the Liza Phase one site. Production is scheduled to begin at the Liza Phase two operation in early 2022, with the Liza Unity having already arrived in the block. The Prosperity FPSO is currently being outfitted in Singapore for the Payara project, scheduled for first oil in 2024.