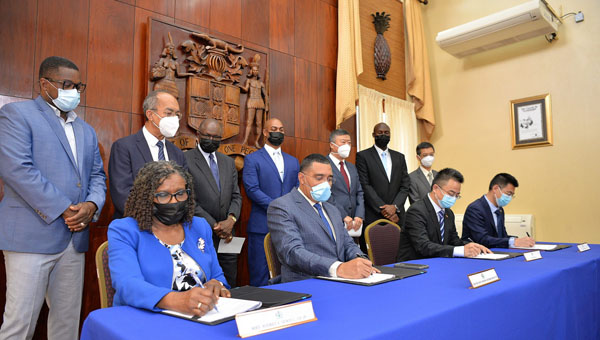 KINGSTON, Jamaica (Thursday, November 25, 2021) — A US$274.5-million contract was signed, yesterday, for the Montego Bay Perimeter Road Project, which will see construction of a 14.9-kilometere bypass of the city.

This is expected to create a safe and reliable alternative route for motorists travelling that direction, and will also assist in reducing traffic congestion within the city.

A drainage study of the Montego Bay bypass area is also to be conducted under the project.

The Ministry of Economic Growth and Job Creation entered into the contractual agreement with the China Harbour Engineering Company Limited (CHEC) for the entity to carry out the works.

It is expected that the project will open new areas to the south of Montego Bay for development and expansion, giving access to lands for housing development.

In his address at the signing ceremony, held at Jamaica House, and streamed online, Prime Minister, Andrew Holness, promised that, as part of the contractual agreement, Jamaicans will be recruited for the jobs that are to be generated under the project.

The Prime Minister revealed that other provisions under the contract are that the contractor, in partnership with the Human Employment and Resource Training /National Service Training Agency (HEART/NSTA) Trust, is required to develop and implement a training program for the transfer of knowledge and technology to Jamaican workers, as on-the-job-trainees, under the Knowledge and Technology Transfer Program.

“We have taken great care to ensure that the contract represents a win-win for the contractor and for Jamaica,” he noted.

With a view to the future, Prime Minister Holness said a “macro approach” in national infrastructure development and incorporation of climate-smart technology, is critical.

He explained that the Montego Bay Perimeter Road Project, which will incorporate climate-smart technology, signals the government’s thrust in this regard.

“This project will help with our resilience. The way the road is constructed and designed it is unlikely to be impacted by flooding… . We are building the complete infrastructure, so that whatever weather events that would occur as a result of climate change, we have adapted our infrastructure to account for that.

“So, where there are these unexpected weather events, we should be able to continue to move traffic in Montego Bay… . All our infrastructure is being built with that in mind,” he added.

“Our goal is to work in Jamaica to become a truly local company, to grow and develop, together, the Jamaican society and to help build a better Jamaica, and to improve the skills [of Jamaican workers,” he said.

The Project is being financed through the government of Jamaica’s Consolidated Fund and implemented by the National Road Operating and Constructing Company (NROCC).