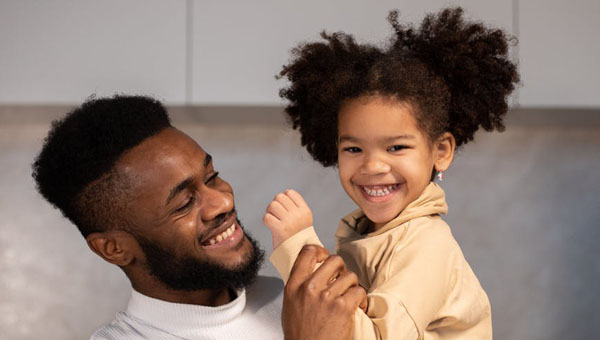 You can spot a happy dad by his smile – or on a brain scan. Photo credit: Monstera/pexels.

Although the COVID-19 pandemic profoundly impacted all our work and living arrangements, one thing particularly stood out for dads: during the nationwide lockdowns, fathers ditched the office and came home in their millions. The UK Fatherhood Institute, a think-tank, realised this was a unique social experiment and conducted research into “lockdown fathers” in spring 2020, to investigate its consequences.

The study, which surveyed 2,045 UK fathers, found that many reported spending more time, than usual, on childcare and education during the lockdown. Dads also predominantly indicated that they emerged from this experience more confident as parents and in better relationships with their children.

Now our own new research, published in the journals, Child Development and Social Neuroscience, unveils just how deeply this confidence can be traced. We found that dads, who have more positive attitudes about their parenting abilities — and about fatherhood, in general — show differences in their brains, to those who don’t.

Our findings are timely. In many societies, dads’ involvement in parenting has dramatically increased. And as the UK Fatherhood Institute’s study revealed, this has a wide range of effects – including fathers gaining insights into their partners’ caring roles and growing more aware of the importance of dads spending time with their children. Many of the fathers in that study, reported wanting to keep some of the changes, such as more flexible working hours and the opportunity to work more from home, once the pandemic was over.

That said, separated fathers saw their children less during the lockdown, and only a minority of these dads reported to have left lockdown feeling more confident in their ability to help with their children’s schoolwork. This demonstrates the importance of supporting dads, by giving them more time and space to bond with their kids – regardless of their relationship status.

What we did
The number of scientific studies, on the role of fathers in child development, has steadily grown, over the last few years. Nonetheless, the vast majority of available research on parenting has focused on mothers, which is partly down to mothers historically shouldering most of the childcare burden and being more available as research participants. To fill this gap, we wanted to specifically investigate the father-child relationship, from an attachment and caregiving perspective.

In a first step, we invited 66 dads and their kids, aged five to six, to our lab and asked them to solve puzzles. They did so, either together or independently, while we scanned dads’ and kids’ brains with functional near-infrared spectroscopy (fNIRS). This is a method that records brain activity with the help of optical sensors that are attached to a head cap. We then tested whether dads’ and kids’ brains get “in sync” with each other during cooperative puzzle-solving. Such synchrony arises, when there are aligned decreases and increases in activity in the same brain area at roughly the same time.

In a second step, we assessed 50 fathers’ brain anatomy with magnetic resonance imaging (MRI). Our main area of interest was the hypothalamus. The hypothalamus is involved in various physiological processes, such as hormone production and maintaining body temperature, but also plays a key role in pair-bonding, parenting and caregiving.

Finally, dads provided answers to two questionnaires, relating to their caregiving beliefs. With the “role of the father questionnaire”, we assessed how strongly dads believed that they are capable of being a good father, should be sensitive to their children, and involved in child development. Another questionnaire probed how much dads indicated enjoying spending time with their kids. 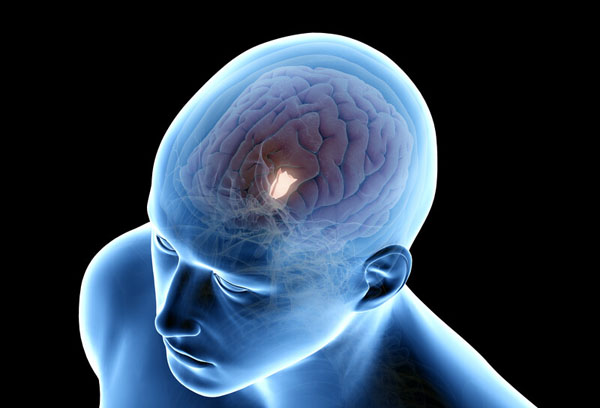 The location of the hypothalamus in the brain. Photo credit: (c) Can Stock Photo / Eraxion

Our findings revealed that dads’ and their kids’ brains were more in sync during puzzle solving when dads scored higher on the first questionnaire – how strongly they believed they were good fathers. We also observed that, in the same (50 out of 66) fathers, brain anatomy, and specifically the size of the hypothalamus, was associated with dads’ caregiving beliefs: the higher fathers scored on the first questionnaire, the larger was their hypothalamus volume. Furthermore, dads’ hypothalamus volume was also positively related to how much they reported to enjoy interacting with their kids.

Our results revealed a correlation. We therefore do not know whether hypothalamus volume determines how good men are at being dads, or whether wanting to be a good dad leads to increased hypothalamus volume. More research is needed to answer this question.

What it means
Dads’ attitudes toward parenting have previously been shown to be a strong predictor for their involvement and capability. Our new findings underscore the importance of fathers’ caregiving beliefs on a neurobiological level.

These novel insights are important, because brain-to-brain synchrony is linked with facilitated coordination and communication between children and parents.

Our research also sheds light on dads’ brain anatomy, especially the role of the hypothalamus. Most available data on it stems from animal studies, and the few results obtained in humans mostly focus on mums and not dads. We will follow up on these initial findings by also looking at other brain areas in the paternal brain.

Dads are more involved in childcare than ever before. And, as our research shows, their caregiving attitudes seem to have knock-on effects on the relationship with their kids. It therefore seems very relevant and justified to promote the importance of dads’ involvement in childcare in a broader societal context, giving them enough time and space to bond with their kids. Doing so will not only raise dads’ confidence and capabilities, but be rewarding for them, their children and partners. After all, dads – like mums – are biologically wired to be parents.

Pascal Vrticka is an Assistant Professor/Lecturer in Psychology, at the University of Essex.