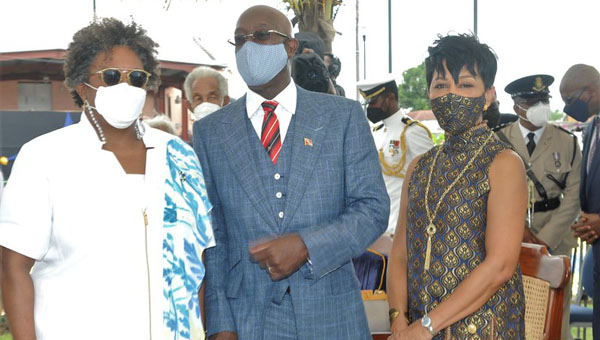 BRIDGETOWN, Barbados (Thursday, December 2, 2021) — During her Address to the Nation, at the country’s National Independence Awards Ceremony in Golden Square Freedom Park, on Tuesday, Prime Minister, Mia Amor Mottley, shared the news that legislation that “provides a new deal for vendors”, is expected to be passed in Parliament, tomorrow.

The Prime Minister announced: “We promised you a new deal, and the greatest pride I have is that Friday morning, the first piece of legislation that we expect to be passed in Barbados’ Parliament, will be the legislation that provides a new deal for vendors; a legislation that will stop making them criminals for wanting to support their families and to do good by them.

“This has been in the works for over six decades, and the stories of how many people in this country are only here, because of the extent to which their parents and grandparents were able to take sun and rain in order to sell, so that they could keep you in school…. It is time [to do right by the vendors].”

She shared specific messages to other groups, including young parents, young people, mature citizens, and public servants; noting that the older ones in the society have a duty to continue to guide young people, while understanding that their world is different from the one in which they grew up.

“Our young people must believe that this is the best country to provide their best future. They must be at home in this nation, they must not feel like tenants in our nation, and they must understand that what we are building is freely available to everyone. For our Parliamentary Republic must be fundamentally about justice and peace and security and opportunity and fairness, Mottley declared.

“The difficult discussions will come just as they do in our families, and we must not shy away from them as a nation.  Contrary to public opinion, I’m actually happy for the level of dialogue that we have been able to engender in this nation…. This has been a nation, where sometimes we’ve been told not to allow the voices of our children to be heard, when in truth and in fact, what we need are young, confident people acting as global citizens, ready to take on the world but never forgetting their Barbadian roots,” she added.

Mottley told the young mothers and fathers that they were required to help build this nation; urging them to teach their young ones right from wrong, adding that they would receive reinforcement from churches and schools.

“But the primary responsibility must always be yours, and regardless of what you face in life, that responsibility of teaching our children wrong from right must never cease. That capacity to foster respect, loyalty, compassion and all of the values that make a difference to the kind of people we shall be, …is yours to imbue in our children,” she stressed.

The Prime Minister acknowledged that the COVID-19 pandemic had made life hard for some, but she reminded the parents that their responsibility was to nurture their children, just like their fore-parents did, with less.

Public officers, the Prime Minister said, have a responsibility to transform this nation. She noted that in today’s world, decisions were being made sometimes at lightning speed and, if they were not made so quickly, the country would be left behind.

Mottley lamented that there was still no direct link with Africa, and said the Caribbean Community must work to allow for direct engagement with the citizens there.

She urged citizens of Barbados to do credit to their nation, add to what they had inherited and make the country one of the best small states in the world.