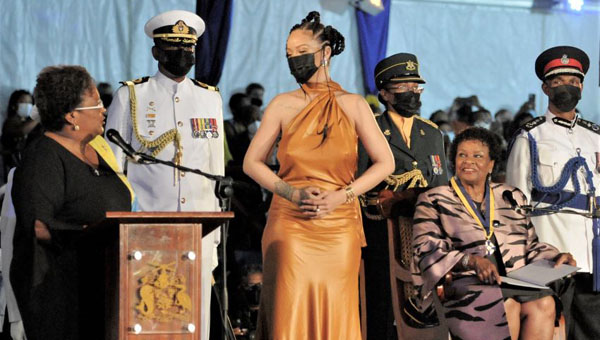 Prime Minister, Mia Amor Mottley, made the announcement, just before 1:00 am, during the investiture ceremony in National Heroes Square, to officially declare the island a republic, and install Dame Sandra Mason as President.

The Prime Minister explained that the decision was taken, in accordance with Chapter 399 of the Laws of Barbados, the Order of National Heroes Act (Section Eight).

“…Within one mile of this space from Bridgetown, there is a National Hero, by the name of The Right Excellent Sir Garfield St. Alban Sobers, born of humble origins, but capable of capturing the imagination of the world, by being the greatest of all time in cricket….

“We, too, have on the other side of Bridgetown, born less than one mile from here, to and literally, from humble origins, catching a ZR to Combermere School, but above all else, commanding the imagination of the world, through the pursuit of excellence, with her creativity, her discipline, and, above all else, her extraordinary commitment to the land of her birth.

“Pursuant to Clause B of the Schedule and having been satisfied that Ambassador Robin Rihanna Fenty has given service to Barbados, which has been exemplified by visionary and pioneering leadership, extraordinary achievement, and the attainment of the highest excellence that is redounded to the honour of Barbados, my government has the distinct honour of recommending to the President, who has kindly and graciously accepted that Ambassador Robin Rihanna Fenty … shall have conferred upon her the Order of a National Hero of Barbados…. May you continue to ‘shine like a diamond’ and bring honour to your nation by your words, by your actions, and to do credit, wherever you shall go. God bless you, my dear,” Prime Minister Mottley declared. 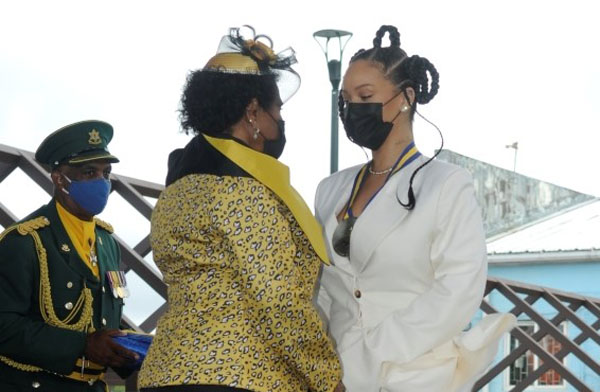 To date, Rihanna is the youngest person to receive the honour, and has joined Sir Garfield as the island’s second living National Hero.

Since her introduction to the international scene in 2005, with her debut single, ‘Pon De Replay’, Rihanna has gone on to win nine Grammy Awards.

Aside from making her mark as a singer, the 33-year-old has developed into an iconic businesswoman in the beauty and fashion industries. She has also been recognised internationally, for her humanitarian efforts, through the Clara Lionel Foundation.

After receiving her insignia, “Rihanna” thanked the government, saying she had travelled the world and received several awards, but none could be compared to the recognition of her homeland; adding that she was proud to be a Barbadian and urged the young people to continue to “push Barbados forward”.

Prime Minister Mottley also revealed that the island’s list of National Heroes would be expanded next year.

“We will do the remaining ones by the National Heroes day of 2022,” she stated, noting that these persons were selected, based on nominations received from the public.