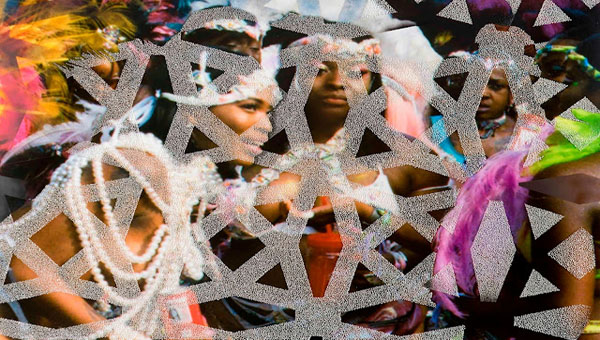 In 2019, when the Art Gallery of Ontario (AGO) acquired the Montgomery Collection of Caribbean Photographs (1840-1940), I visited the museum to see some of these images of Caribbean life and history.

On entering the AGO, one does not have to search for the exhibition, as it declares itself with “Moko Jumbie”, a newly-commissioned work by the British-Trinidadian visual artist, Zak Ové. The18-foot-high, mixed media sculpture greets you in Walker Court, the AGO’s atrium.

Ové depicts a stilt-walking figure, central to carnival celebrations in Trinidad and other Caribbean islands. “A guardian, who travelled to the region to protect enslaved peoples from evil, Moko Jumbie blends African diasporic mythologies in Central Africa. “’Moko’ refers to a healer, while ‘Jumbie’ is a Caribbean term for spirits,” notes the description of the installation.

In this work, Ové sees “a joyous freedom, hope for a better life, and the physical representation of walking tall, toward a brighter future”.

This introduction is a big and warm welcome to the main exhibition on the fifth floor, showcasing the Caribbean and its Diaspora.

Showcasing selections from the Art Gallery of Ontario’s recently-acquired Montgomery Collection of Caribbean Photographs, Fragments of Epic Memory presents works that trace the region’s history, from the immediate post-emancipation period, into the twentieth century.

“As photographic technology became more available during the late 1800s, the camera was quickly taken up, as a primary tool of the colonial gaze. While these photographs offer a rare opportunity to bear witness to the conditions of Caribbean life in the colonial environment, they also present gaps, silences, and erasures.

“Works by modern and contemporary artists of Caribbean descent, as well as studio and family photographs, are displayed in dialogue with the colonial-era objects, often serving as a necessary counterpoint. This presentation reveals how historical narratives, representation, and notions of freedom are constantly revisited, re-imagined, and reclaimed in different periods, underscoring the nuances that shape the work of artists from the Caribbean and its Diaspora.”

Although these more than 30 artists of Caribbean descent are separated by time, geography, and language, “their works respond to conventional historical representations, by presenting new perspectives on, and from, the region – its geography, its people, its culture, and its histories”.

Fragments of Epic Memory blends historical and contemporary narratives, presenting more than 200 photographs from the AGO’s Montgomery Collection of Caribbean Photographs, alongside paintings, sculpture, and video works by modern and contemporary Caribbean artists that show how the region’s histories are constantly revisited and re-imagined, through artistic production, over time. 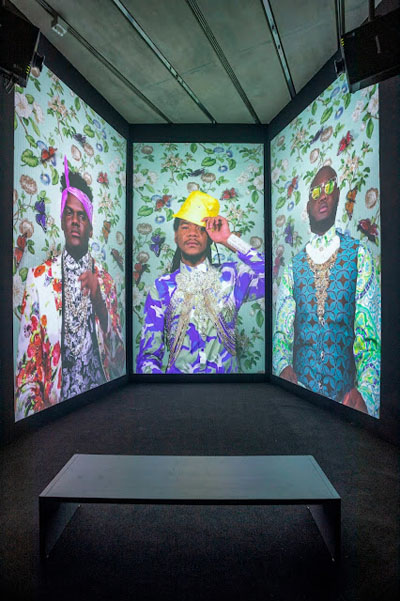 “The story of the Caribbean, the Diaspora and its artists aren’t one story, but a range of histories, media, voices and lived experiences, best understood through the interplay of them all,” says Crooks. “Toronto is also home to one of the world’s largest Caribbean communities, and the work of local artists, like Sandra Brewster, Natalie Wood and Vancouver’s Charles Campbell is a significant part of the transnational story we’re telling.”

In “Sweet Sugarcane” (Female Figure) and “Sweet Sugarcane” (Male Figure), Leasho Johnson, a Jamaican visual artist, “blurs the boundaries of the taboo and the ‘traditional’, challenging conventions around self-expression in the contemporary Caribbean. His playful anime-styled figures engage with ideas around gender, sexuality, colonial violence, Jamaican dancehall culture, and consumerism in Jamaican society”.

“In the series, ‘Sweet Sugarcane’, the male and female figures use a cane stalk as a pole, as they deploy titillating dancehall moves. These irreverent, provocative gestures establish the cane field as a place of pleasure and liberation, and enable these figures to rupture their ties to slavery,” notes the description of the art.

“The Afflicted Yard”, by the late Peter Dean Rickards, a self-described “media terrorist”, is included in a space, where one can sit, watch and be captivated by the dance moves of the young men outdoors, with big speakers in the foreground.

Rickards worked in various disciplines and, in the dial-up internet era, helped launch Kingston Signals, a radio show that broadcast live events, featuring top dancehall artists. But Rickards’s most notorious accomplishment was “The Afflicted Yard”, an online gallery, where he used his own provocative photographs and videos as a counterpoint to stereotypical touristic perceptions of Jamaica.

Sandra Brewster’s “Feeding Trafalgar Square” was commissioned for the exhibition. It uses the lens of personal biography to expand the artist’s ongoing investigations into the period of the 1960s and 1970s. “This large-scale photo transfer features Brewster’s mother in the 1970s, during a solo trip to London, England, capturing her utter joy in the performance of a universal tourist activity: feeding pigeons.”

Born in Toronto to Guyanese parents, Brewster makes multimedia artworks that explore migration and the global movements of Caribbean people. She often focuses on the Black presence in Canada, with a particular interest in the 1960s and 1970s, when the number of people arriving in the country from the Caribbean region more than doubled.

“In the colonial Caribbean, such Black performance traditions were also a tool of cultural resistance that undermined the colonial authorities. While exploring dual identities and his own biography, Smith uses his work to highlight the retention of carnival traditions in the Diaspora, boldly underscoring its subversive history, while emphasizing the joy and celebration of the performance.” A further exploration of these themes can be seen in Smith’s “Untitled, 7 Women”, which is also in the exhibition.

Using “picotage”, his signature technique, Smith meticulously picks up the emulsion of his pigment prints, obscuring his subjects with textural patterns and limiting the access of those looking from the outside in.

Ebony G. Patterson’s “…three kings weep..” is a multi-channel video installation, featuring three tearful subjects in regal dress, and poses important questions about the lack of dignity and humanity, with which Black men are so often viewed in our society.

Guyanese-born Sir Frank Bowling’s monumental painting ,Middle Passage, on loan from the National Gallery of Canada, situates faint map drawings of Africa and the Americas atop an abstract sea of yellow and red paint, reminiscent of the Guyanese flag. It has a commanding presence in the gallery.

The exhibition is inspired by the writing of post-war Caribbean writers and poets, such as Derek Walcott – who won the Nobel Prize in Literature in 1992 and whose Nobel Lecture was titled, The Antilles: Fragments of Epic Memory– Kamau Braithwaite, and others.

The Montgomery Collection of Caribbean Photographs includes studio portraits, landscapes, scenes of bustling markets, labour, industry and tourist views. A small part of the Collection’s 3,500 images, these photographs highlight the work of a range of mainly European and American photographers, who were drawn to the region. Shedding light on the monumental changes taking place in the region during the latter part of the 19th century, these photographs are a visual archive of the colonial legacies, inherited by modern and contemporary artists and their descendants.

The Collection was, in part, donated by Patrick Montgomery, and, in part, purchased by the AGO, with the generous support from 27 donors, many of whom are members of the Black and Caribbean communities.

Fragments of Epic Memory is designed to be immersive and invites visitors to experience the multiple ways of encountering the Caribbean and its Diaspora, from the period following emancipation, through to today.

It’s a good space to invite family and friends, and to have a conversation about the wonderful creations experienced.