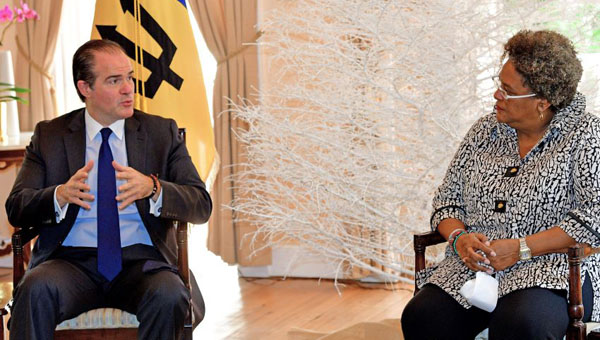 Prime Minister Mottley said the Bank has always had a role in the island’s development, over the years, as she recalled its assistance with the transformative EDUTECH Program, which was rolled out in local schools, less than 25 years ago.

The Prime Minister said she and her officials were looking forward to working with the IDB, on a number of climate-related issues, as she contended that “we have to think outside of the box” on matters pertaining to adaptation, as a result of the climate crisis.

During the wide-ranging talks, Mottley and Claver-Carone also spoke about natural disaster clauses; the coastal development work, undertaken by IDB in Barbados; the climate crisis and its impact on small island developing states; and the COVID-19 pandemic and its negative effects on the economy, in particular for tourism and travel-dependent countries.