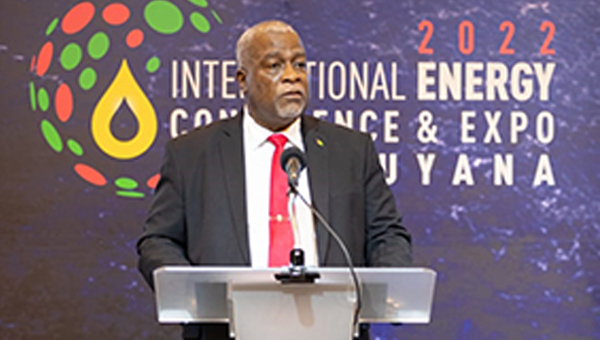 GEORGETOWN, Guyana (Thursday, February 17, 2022) — Guyana will be pursuing a low-carbon transportation infrastructure, to reduce the demand for imported fossil fuels for vehicular transport in 2022.

This was disclosed by Prime Minister, Mark Phillips, on the third day of the International Energy Conference and Expo, ongoing at the Marriott hotel, in Georgetown.

Prime Minister Phillips said Guyana remains committed to a low-carbon economy, while at the same time, advancing its transition away from conventional energy sources.

“To accomplish this, we intend to foster the development of an electric vehicle industry, to substitute fossil fuels with electricity, while enhancing the ability of the electric grid to integrate high levels of intermittent renewable energy.

“To this end, the installation of fast-charging stations for electric vehicles will be piloted in 2022 in Regions Three, Four and Six. This would be supplemented with future initiatives to increase efficiency levels of vehicle consumption of fuel,” Phillips added.

He noted that the new oil-producing nation intends to create an energy mix, using low-carbon energy resources, such as solar, hydro, wind, biomass and natural gas.

The Prime Minister elaborated that the energy mix will lead to more than 500 megawatts of newly installed energy, over the next five years;and pointed out that the Gas-to-Energy Project will play a major role in the government’s effort.

“The project will provide 300 megawatts of power to the national grid and is expected to result in substantial cost savings for power generation, while reducing electricity costs to consumers by at least 50 percent. In parallel, the implementation of the 165 megawatts Amaila falls hydropower project will be advanced to further enhance our nation’s energy security.”

The Prime Minister explained further that Guyana’s energy transition will generally undergo three stages. From 2022 to 2027, there will be a combination of natural gas, hydro and solar power. Stage two will see the replacement of heavy fuel oil, the expansion of wind farms and the commissioning of Guyana’s second hydro plant from 2027 to 2032. The third phase which will commence from 2032 onwards will see the continued expansion of those projects using new technology.

However, at present, Prime Minister Phillips said the government is developing solar farms and mini-hydro power systems in the hinterland with close to $1.1 billion provided in budget 2022 for that purpose.

He said that access to energy has far-reaching economic, environmental and social benefits.

“Consequently, in addition to serving domestic needs, it is important to link rural electrification efforts to productive activities such as ICT, commerce, and agro-processing to allow for greater community involvement, retention of skills in the community and long-term sustainability,” PM Phillips stated.

He reiterated that Guyana remains committed to achieving a low carbon economy, and added that the transition to clean energy will remain a national priority.

The four-day energy conference, which culminates tomorrow, is being held under the theme ‘Charting a sustainable energy future’.