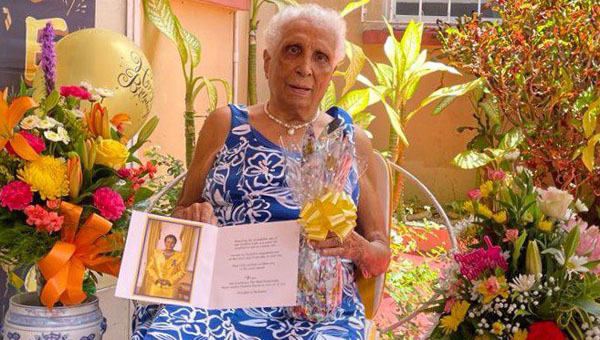 ATLANTIC SHORES, Barbados (Friday, May 20, 2022) — Barbados’ newest centenarian, Sylvia Elretta Springer, who said it is “wonderful” to be alive, celebrated her milestone-birthday on Sunday, May 8, with the President of Barbados, Dame Sandra Mason, via Zoom. Some family members also joined, via Zoom, while her daughter and granddaughter were there in person.

After a prayer by the centenarian’s granddaughter, Tania Lawes, President Dame Mason asked Mrs. Springer to share how she was feeling, and the centenarian responded: “It is wonderful to be here….I can speak and see everyone. Those are some things to be very thankful for. I can still move…. I am hoping that I can move a little more in the future.”

Lawes reflected on her grandmother’s life, stating that she spent much of her life in Brooklyn as a nurse, and was a very good cook; and added, “My favourite dish that she used to make was liver and onions, and I would only eat it how she would make it. That was exciting!”

Mrs. Springer disclosed that she lived in the United States for 30 years, and worked as a nurse at Brooklyn Eye and Ear Hospital, as well as at Kings Country Hospital in Brooklyn. She moved back to Barbados in 1983 to stay in her home in Atlantic Shores, as “it was time to come home and rest…and do something more relaxing”.

Shortly after returning to Barbados, Mrs. Springer joined the American Women’s Club, which kept her very busy. She said her involvement with the Club meant “always trying to collect things for people, who don’t have” and that there were “a lot of functions to make money to contribute to the poor”.

Her daughter, Rosita Lawes, who is currently visiting from the USA, said she used to visit her mum regularly, but the COVID-19 pandemic made it challenging to visit, as often as she would like.

She commended her mum on being “a very special person”, who lived a very hectic life; adding: “She has a great sense of humour. She is an excellent cook….and I am just happy to be here, with her.”

One of Mrs. Springer’s grandchildren, Maya Lawes, who wished her happy birthday and Mother’s Day, disclosed that her grandmother loves to play Scrabble — and is very good at it, oftentimes winning. Her favourite foods are her homemade pudding and souse, cou-cou and flying fish, as well as mashed potatoes.

The centenarian said she was delighted and grateful to have received a card, a bottle of wine and a bouquet of flowers from the President, saying: “Thank you so much …. I love flowers. I love going into the garden, when I could….”

She added that the American Women’s Club was still very active and that they kept in contact with her; sending flowers and cards, and calling regularly. She, however, noted that the Club “needs some new blood in it – to keep doing good things for the poor….”

Mrs. Springer, whose husband is now deceased, has two children (one who is deceased), four grandchildren and three great-grandchildren.