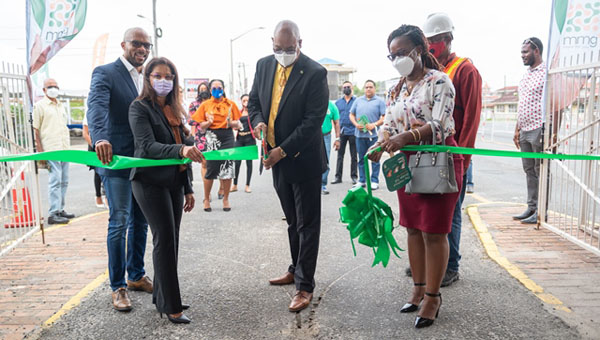 PETER’S HALL, Guyana (Sunday, May 22, 2022) — Financial accountability and less commute time are some of the benefits, expected to be derived from the modern automated tolling system, which was officially commissioned at the Demerara Harbour Bridge (DHB) on Friday.

Minister of Public Works, Bishop Juan Edghill, hailed the new system: “I’m happy to join this occasion to publicly launch this new initiative, which is aimed at doing three things. Number one, making commute across the bridge easier, number two, improving financial accountability and number three, bringing us into modernisation, where people don’t always have to be searching their pockets and bags for money to pay.”

He recalled that the move to implement the automated tolling system was birthed after a tug hit the 6,074-foot long floating toll bridge — that spans the Demerara River and was commissioned on July 2,1978 — and caused traffic to stall.

The minister explained that, at the time, a decision was taken to allow vehicles to pass without paying, so that it would not interrupt the flow of traffic.

He added that, in less than one hour, traffic that was backed up for miles, cleared the bridge. 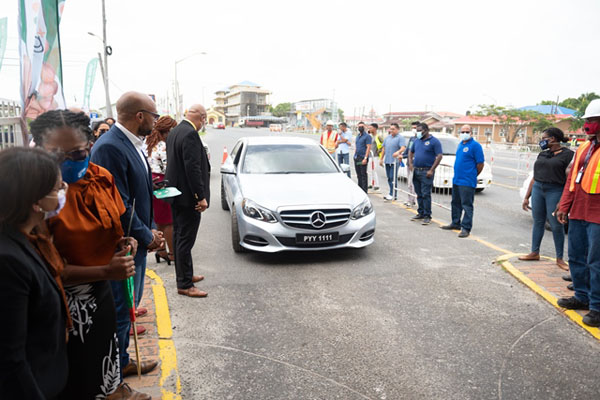 Minister of Public Works, Bishop Juan Edghill and others watch on as a vehicle utilises the automated tolling system. Photo credit: GDPI.

The Minister also noted that the New Demerara Bridge will also feature a similar system when it materialises. However, the hope is to have it on the western side of the bridge as opposed to the eastern side, as it is situated currently.

The automated system uses a Radio Frequency Identification (RFID) strip, which is picked up by scanners, installed above the toll booth. The system is supported by GTT’s (Guyana Telephone and Telegraph Company) Mobile Money Guyana (MMG) to facilitate use of the system, by way of purchasing credit as payment.

General Manager of GTT’s Mobile Money, Bobita Ram, said the new system is simple, and urges commuters to take advantage of it.

“We encourage all commuters to register for the RFID tag, which is placed on the vehicle’s windscreen. Use MMG whether it is from your own MMG account or one of our agent locations, to put money on your Demerara Harbour Bridge Account; and then you just breeze through, basically in a matter of seconds,” she stated.

The new system is expected to make commuting easier for the over 25,000 vehicles that use the bridge daily.