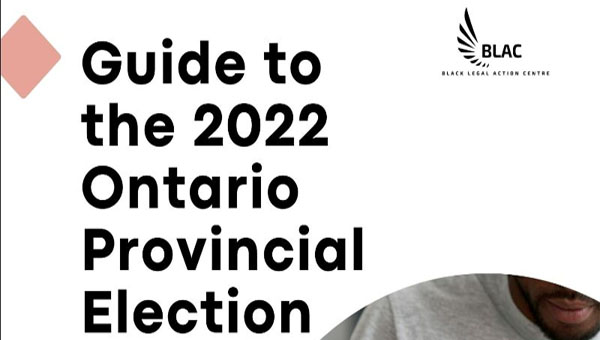 TORONTO, Ontario (Saturday, May 28, 2022) — With the upcoming Ontario election fast approaching — next Thursday, May 2 — the Black Legal Action Clinic (BLAC) has released a comprehensive, important and valuable report, entitled, Guide on the 2022 Ontario Provincial Election.

The Guide outlines what the major political parties are planning to do, to address anti-Black racism in education, employment, housing, health, and criminal justice.

The Clinic said it focussed on these areas, “because they are the most important to the freedom, health, and general wellbeing of Black people in Ontario”.

BLAC explained further, that the document “only reflects whether a party has taken a public position in support of an issue. It does not necessarily mean that they have come out against it.” 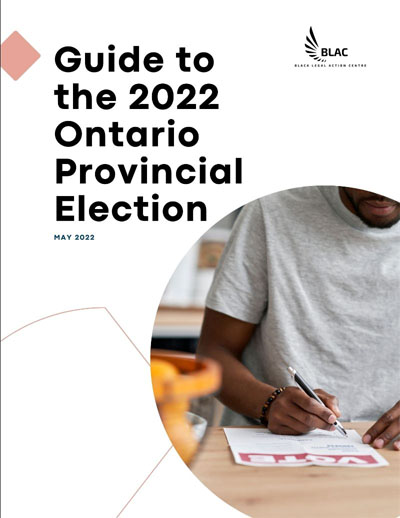 In the introduction in the election guide BLAC says: “In June 2022, people in Ontario will be able to vote on who will lead the provincial government for the next four years. The results of this election will impact the daily lives of Black people, across the province.

“Will our children get to learn in safe and inclusive environments? Will our jobs pay us enough to support our families? Will we be able to afford a place to live? Will we continue to be stopped, questioned, charged, arrested, assaulted and killed by police? These things depend, in part, on decisions made by the provincial government.”

With respect to education, the report posits: “In the Greater Toronto Area, teachers and administrators are more likely to stream Black high school students into special education and applied programs.

“Teachers and administrators are also more likely to suspend and expel Black students. At the Toronto District School Board, for example, Black students make up 12% of the student population, but 48% of all expulsions.

“When lesson plans and educators do not reflect of the lives, histories and communities of Black youth, it can lead to students becoming disengaged. Black students are less likely to go to college and university than white and other racialized students.

“In 2016, Black people, aged 23 to 27, were reported to be less likely than other people in that age group to have a post-secondary certificate, diploma or degree.

And, regarding the Ontario criminal justice system the Guide reports that “80% of Black people in Ontario believe that anti-Black racism in policing is a problem. Police in Toronto are 7 times more likely to charge Black people than they are to charge people of other races. However, charges laid against Black people are more likely to be withdrawn and less likely to result in conviction.

“According to a 2022 report, 1 in 15 young Black men in Ontario have been incarcerated compared to 1 in 70 young White men. A number of community organizations have raised concerns that the people in jails and prisons across Ontario are dying at alarming rates, and being subjected to physical abuse and racism.

“People who have low income, unstable employment and housing, and poor education and health outcomes are more likely to be involved in the criminal justice system. This means that they are also unlikely to be able to pay for a lawyer to protect their rights. In 2019, Canada’s Black population experienced the highest number of police reported hate crimes since 2009.

“Anti-Black hate crimes accounted for 18% of all hate crimes, making Canada’s Black population the most commonly targeted group overall that year. According to a 2012 study, the 56% of the people accused of hate crimes targeting Black people were under age 25, 40% were under 18. Between 2004 and 2020, racialized people in Ontario accounted for 75% of the homicide victims in Canada. 44% of those victims were Black.

For a copy of BLAC’s complete guide on the Ontario election, as it applies to Black people, click on the following link: www.blacklegalactioncentre.ca/wp-content/uploads/2022/05/BLAC-Guide-to-the-2022-Provincial-Election.pdf