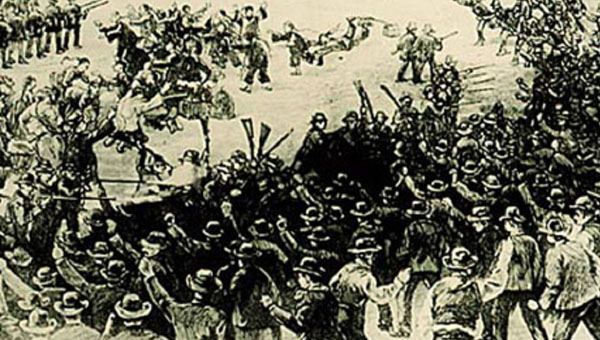 The Shelburne riots was the first race riots to have been recorded in North America. Photo credit: The Canadian Encyclopedia.

Most people in Canada do not think that Canada has any Black history. In actuality, we have mostly focused  on the history of slavery in the United States and, in comparison, Canada’s history does not seem as bad and gets a passing grade.

Such a mindset has seemingly allowed us to say, “As long as we’re not as bad as America, we never have to talk about what happened in our own country”.

We must not fall for the hype, because Canada is not the nation of cultural tolerance we think it is, or is led to believe.

Background
The British, during the American Revolution, offered freedom and land to any enslaved individual, if they fled their American masters and picked up arms to fight for Britain. About one-fifth of the Black American population at the time, took advantage of the offer.

The war officially ended on September 3, 1783, when Britain accepted American independence in the Treaty of Paris. In the aftermath of Britain’s defeat

Preparation for Separation
In the wake of Britain’s defeat in 1783, a stream of Loyalists (American colonists, who remained loyal to the British Crown) arrived in Shelburne County, on Nova Scotia’s South Shore. Many, mostly the White Loyalists, settled in Shelburne, while the majority of Black Loyalists sought refuge, less than 10 kilometres away, in Birchtown.

Equality — Not To Be
The Black Loyalists, who gained freedom, soon learnt that it did not mean that they were any closer to equality. Most of the land grants, promised by the British, never materialized, were delayed or were in much less desirable locations than the land given to White Loyalists.

In the absence of land ownership and hardly any possessions, many Black Loyalists were exploited as a source of free labour by the provincial government. In some cases, Black Loyalists were “forced into indentured servitude, frequently in conditions that were startlingly similar to the slavery from which they had escaped. Many others were kidnapped and sold back into the slave system in the United States or as far away as the Caribbean. “Though it never developed the plantation economy of the American South, Nova Scotia was undoubtedly a slave-owning society.”

The first recorded Race Riot
After Britain’s defeat in the American Revolution, many white Loyalists also fled to Shelburne with hardly any money and few possessions. Their land grants were also delayed and many were forced to work as labourers. Any disquiet White Loyalists had with the British administrators, was quickly directed towards the Black Loyalists sharing the same town. Often, Free Black Loyalists were willing to work longer hours and for less pay than their White counterparts, hence racial tensions rose quickly.

The mob grew to several hundred, and rampaged through the Black part of town, pulling down all the houses, beating people and driving them out of town. Most Blacks fled to Birchtown, empty handed, having everything they owned stolen or destroyed.

David George was the leading Baptist minister among the Blacks. He had a large following, and preached in Shelburne (formerly Port Roseway) in an area called Blacktown.

The Whites were not too concerned about what sort of message George preached to people of his own colour, but became furious, when he began baptizing Whites. It is reported that on one occasion, a White woman was about to be baptized, when a mob arrived and tried to drag her away.

Authorities intervened and decided that by the guarantees of freedom of religion, the woman could be baptized in whatever manner she chose. The mob left the scene, taunting George with threats, but, despite the threats, he continued to preach.

The mob returned, the very next day, armed with muskets and ship’s tackle. They fixed rope onto the poles of houses, pulled over the preacher’s home and then did the same to the homes of his followers. There were some, who wanted to burn down the more solidly constructed meeting house, but were discouraged from doing so, by the leader of the riot.

The mob grew to several hundred, and rampaged through the Black part of town, pulling down all the houses, beating people and driving them out of town. Most Blacks fled to Birchtown, empty handed, having everything they owned stolen or destroyed.

Sadly, the mob did not stop there, they sought out Benjamin Marston, the land surveyor, planning to hang him for the slow delivery of their land. However, the surveyor was warned and escaped to Halifax. The pastor had fled to a nearby swamp, but was eventually discovered and beaten senseless. Following the attack, he gave up and fled with the other Blacks to Birchtown.

Before the riot, almost half of the free Blacks had settled in Shelburne, because work was easier to find. So when the Blacks in Shelburne were chased out, the population in Birchtown rose significantly. Several hundred refugees camped out, all over the small lots that had been granted to other families. Almost all of the surrounding land had already been granted to Whites for farm and church land, hence the town was unable to expand.

Yet the rioters remained unsatisfied. Many continued their attacks on the Blacks, beating lone travelers, and travelling to Birchtown to pull down buildings and assault the unwary. The attacks only stopped, when troops arrived from Halifax the next month, to restore order.

The governor, John Parr, was horrified by the complete breakdown of the law, which reflected poorly on his governance. He promptly fired Marston, the chief surveyor, and handed over the business of surveying and land dispersion to the Associates– the council of leaders that had  initially developed Port Roseway.

It is plain to see that the Blacks would be left out of the land distribution, and assistance and aid was never offered to the Blacks who had lost their land and homes in the riot. Governor Parr’s primary concern was not to assist the victims, but merely to placate the angry rioters.

Thus the first racial riot in North America sank into oblivion, a grim reminder to Blacks that they could not expect to be treated as equals — regardless of what certificate they carried.