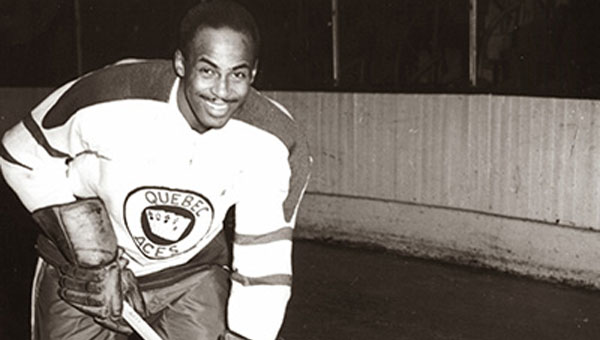 TORONTO, Ontario (Tuesday, June 28, 2022) — Herbert H. Carnegie — regularly considered the best Black hockey player to never play in the NHL — has been inducted, posthumously, into the Hockey Hall of Fame’s Class of 2022, in the Builder Category.

The other five 2022 inductees, all of whom will be in the Player Category, are: Daniel Alfredsson, Roberto Luongo, Riikka Sallinen, Daniel Sedin and Henrik Sedin. The 2022 Induction Celebration will be held on Monday, November 14, at the iconic Meridian Hall Theatre, in Toronto.

“We are elated that my father’s work is being recognized,” said Carnegie’s daughter, Bernice Carnegie, who is also co-Founder, with Bryant McBride, of The Carnegie Initiative (The CI), named in honor of legendary hockey player and social justice pioneer, with the goal of ensuring opportunity and access to hockey, everywhere.

“Thank you to the Hockey Hall of Fame for this honour. My father wanted everyone to enjoy the game, he loved so much and spent his life developing. He influenced the lives of thousands of children and we are proud to carry on his legacy, both through our family and The Carnegie Initiative.”

Started, in conjunction with leading academic institutions, The CI also aims to accelerate the work, started by Herb Carnegie, more than 50 years ago, to make hockey more diverse and inclusive. 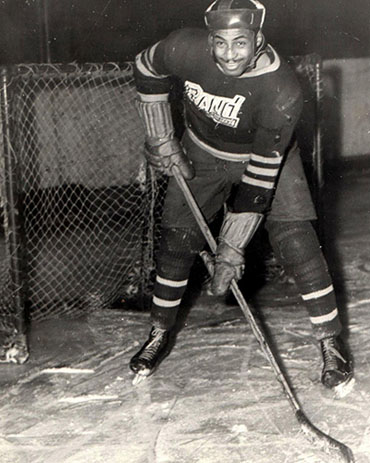 Born in Toronto, Ontario on November 8, 1919, Carnegie grew up listening to ‘Hockey Night in Canada’, dreaming of one day following his Toronto Maple Leafs heroes to the NHL. But, as the son of Jamaican immigrants, the path was strewn with challenges for the young man.

After honing his skating skills on the frozen ponds of North York, Ontario, with his brother, Ossie, Carnegie went on to excel playing hockey with his school. There, he was spotted by Ed Wildey of the Toronto Young Rangers, a Junior ‘A’ franchise in the Ontario Hockey Association.

Young Rangers played their home games at Maple Leaf Gardens, and were given practice time at that arena, every weekday morning at 6am. One morning in 1938, Carnegie’s coach pulled him aside. “See that man up there?” he allegedly asked Carnegie, pointing to a man sitting in the stands watching the practice. “That’s Conn Smythe, owner of the Maple Leafs. He says he’ll give $10,000 to anyone who can turn Herb Carnegie white.”

‘Swivel Hips’ Carnegie went on to an outstanding career playing Senior hockey. While playing with the Buffalo-Ankerite in Timmins, Ontario, the team won the championship in 1941 and 1942. Though Carnegie played with his brother, Ossie, in 1940-41, it was in the 1941-42 season that the famous ‘Black Line’ or ‘Black Aces’ first played together.

The first all-Black line in semi-pro hockey was comprised of Herb and Ossie Carnegie, along with Manny McIntyre. Carnegie described their line in his memoir, A Fly in a Pail of Milk: “I was both a scorer and playmaker, Ossie combined excellent positional play with a wicked shot and Manny took no guff from anyone.” 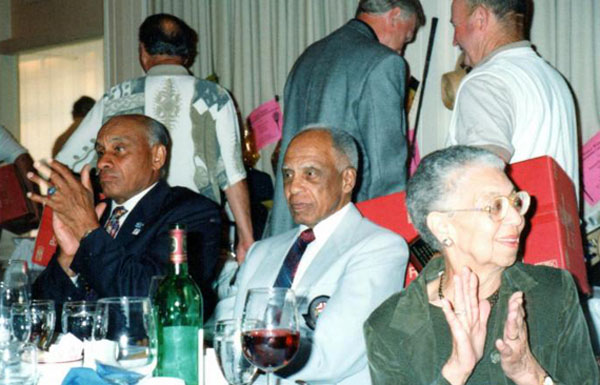 Carnegie and wife, Audrey, with Willie O’Ree, left, at the Summit Golf and Country Club’s golf tournament in 1998. Photo credit: The Carnegie Initiative.

In 1948, Carnegie was invited to the training camp of the New York Rangers. Although most at the time admitted that he was among the best players at camp, the Rangers only offered him a contract to play in their minor league system. The opportunity would have paid Herb less money than he was earning in Quebec and, he subsequently turned down the offer.

At the time, Carnegie said, “The most devastating thing to me was knowing that players on my team were getting the opportunity, whose record wasn’t as good as mine, which clearly showed discrimination and racism of the highest order.”

He joined the Quebec Aces in 1949-50. It was with the Aces that Carnegie would mentor another great, Jean Beliveau, winning the championship together in 1952-53. After four seasons playing with the Quebec Aces, Carnegie concluded his playing career with the Owen Sound Mercurys in 1953-54.

Following his retirement from playing, Carnegie enjoyed success in the investment industry. He founded Future Aces, one of Canada’s first hockey schools in 1955. In 1956, he introduced the Future Aces Creed in an attempt to promote good Attitude, Cooperation, Example and Sportsmanship among young people. The Creed continues today within the Herbert H. Carnegie Future Aces Foundation, which was established in 1987, providing educational programming and bursaries for post-secondary education, a legacy to Carnegie’s ground-breaking work. 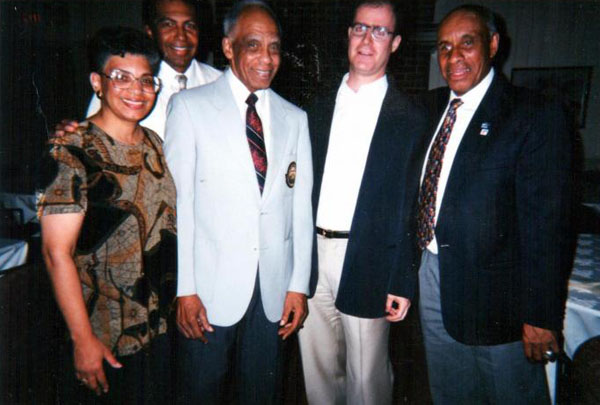 The Carnegie Initiative was co-founded by his daughter Bernice Carnegie in 2021 as an independent oversight entity to continue Herb’s work for inclusivity and diversity in sport. In the early 1990s, Herb and his program were featured in two special issues of ‘The Amazing Spider-Man.’ Herb was also an inventor, creating ‘The Carnegie System’, which was the first instructional hockey board used in the NHL, as well as creating games to teach sports.

An avid golfer, Carnegie won 23 championships and was the Ontario Senior Golf Champion in 1977 and 1978.

In 2005, he was named an honourary Chief of police for York Regional Police and, in 2006, Carnegie received an Honorary Doctor of Laws degree from York University. A public school in Toronto was named in his honour and the North York Centennial Centre was renamed the Herbert H. Carnegie Centennial Centre.