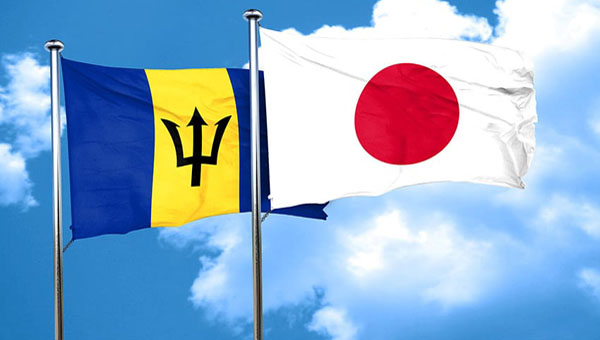 During a welcome dinner, hosted last Wednesday evening, by the new Japanese Ambassador to Barbados, Kayoko Fukushima, Minister of State in Foreign Trade and Business, Sandra Husbands, noted that the relationship between the two countries was a prosperous and friendly one, grounded in the principles of mutual respect and co-operation.

“This substantive cooperation is indeed a cause for celebration, as our tireless efforts undoubtedly redound to the people of our respective nations. This is evidenced in our cooperation on common challenges, such as climate change adaptation and disaster risk reduction, which, undoubtedly, binds our two countries together, and which I am certain, together, we can overcome,” Minister Husbands stated.

She thanked Japan for its assistance, over the years, in areas such as capacity-building initiatives and training opportunities offered by the Japan International Cooperation Agency and Japan Exchange and Teaching Program; assistance in disaster mitigation and management; and the Project for Improving National Sargassum Management Capacities in the Caribbean.

Minister Husbands pointed out that “while we reflect on the work of your predecessors, of which we are truly appreciative, we can look forward optimistically, to the continued fervent pursuit of endeavours, which seek to deepen this relationship…. [And] I am therefore certain that our relationship will continue to be mutually beneficial, … and desire to see this fruitful relationship continue.”

Ambassador Fukushima responded that it was indeed a pleasure to be in this beautiful country, representing the government and people of Japan, as the second resident Ambassador to Barbados.

“Since officially establishing ties in 1967, relations between Barbados and Japan have broadened and deepened through cooperation and exchanges in a wide range of areas, including education, sports, culture and disaster- risk management,” she stated.

She also noted that Barbados and Japan have had a friendly history with mutually-shared values of freedom, democracy and respect for human rights, and she is “extremely confident” that Japan’s friendship with this country will continue to grow.

Fukushima gave the assurance that as she settled into her new role as Japan’s second resident ambassador, she was willing to work with Barbadians, fellow members of the diplomatic corps and international organisations to promote friendly relations.

“These are challenging times, but at the same time, exciting times, and through collaboration and cooperation, we can all achieve mutual benefits for our countries and our people. I am committed to this goal, and I look forward to your support on this journey,” Ambassador Fukushima stated.

Barbados and Japan established diplomatic relations on August 29, 1967, and Japan opened its first resident mission in Barbados in 2016.