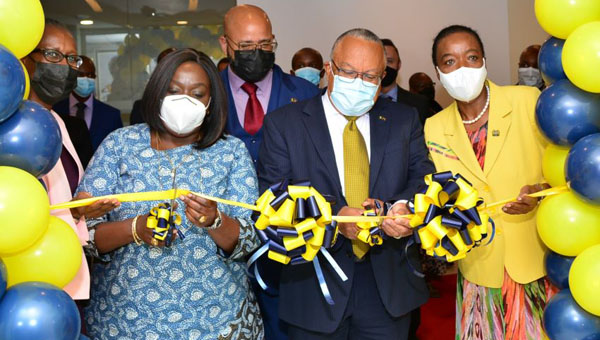 This happened, when Barbados’ Minister of Foreign Affairs and Foreign Trade, Senator Dr. Jerome Walcott, officially opened the CARICOM diplomatic mission in Nairobi, Kenya, on Monday, marking the first of its kind on the continent.

Speaking at CARICOM’s new offices in the South Tower of the Two Rivers Office Complex, Dr. Walcott explained that the event marked a major milestone in relations between Barbados and Africa.

“The commissioning of this mission here, in Kenya, the first diplomatic mission of Barbados to be commissioned on the African continent, is a testament of Barbados’ outreach to the motherland and cradle of civilization, where many of our ancestors were born,” Minister Walcott said.

“Barbados, at this time, looks to Africa in pursuit of new relationships and partners with the aim of deepening engagement and cooperation with like-minded nations both bilaterally and multilaterally,” he added.

Minister Walcott, who was accompanied by Barbados High Commissioner to Kenya and Permanent Representative to the United Nations in Nairobi, William Alexander McDonald; and Permanent Secretary in the Prime Minister’s Office, Alies Jordan, explained this latest development was the result of a continued commitment to cooperation made, between the Prime Minister of Barbados, Mia Amor Mottley, and President of Kenya, Uhuru Kenyatta.

Meanwhile, Kenyan Cabinet Secretary for Foreign Affairs, Ambassador Raychelle Omamo, deemed the opening as a fulfilment of a promise to secure a home for the Caribbean community in Kenya, made by President Kenyatta during his visit to Barbados in 2019.

“This is a promise of historic significance, in that it will forge closer people-to-people ties between Africa and CARICOM,” Ambassador Omamo said, on behalf of President Kenyatta.

“Africa has been separated from the Caribbean region, not only by the Atlantic Ocean, but by centuries of few interactions, despite our shared common descent and history. But I am proud to state that Kenya and Barbados have been at the forefront in fostering linkages, between Africa and the Caribbean countries,” she added.