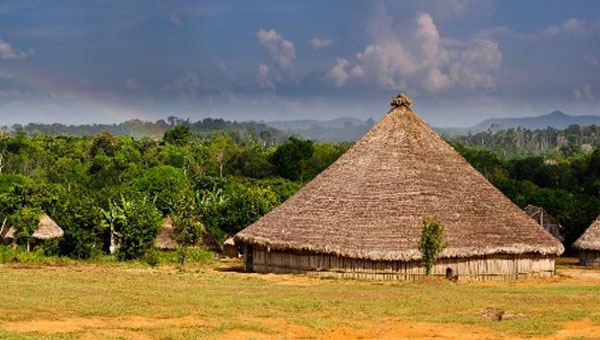 A section of an Amerindian community in Guyana. Photo credit: James Brascombe.

GEORGETOWN, Guyana (Wednesday, June 29, 2022) — The government, through its new and expanded Low Carbon Development Strategy (LCDS) 2030, plans to set aside 15 percent of all revenues, earned from forest conservation, for Amerindians and forest-dependent communities in Guyana.

The promotion and development of these two populations — a priority of the President Irfaan Ali-led Administration — is in recognition of the value and significant role they play in conservation.

This dedicated 15 percent is not all that the Indigenous Peoples and forest-based communities will benefit from. In fact, these parties will be direct beneficiaries of all aspects of the LCDS 2030, notably from renewable energy and climate adaptation and mitigation projects.

However, the 15 percent that will be set aside will be invested into the priorities of communities, including land titling, capitalisation of the Amerindian Development Fund (ADF), healthcare, education, physical and digital infrastructure and other projects that residents regard as important to their communities’ development.

The government explained that from consultations with residents, it will deliver support through a new phase of the ADF; support for participation in reducing emissions from deforestation and forest degradation (REDD+) and ART-TREES; as well as the completion of the land titling programme.

The REDD+ is a framework, created by the United Nations Framework Convention on Climate Change (UNFCCC) Conference of the Parties (COP), to guide activities in the forest sector that reduces emissions from deforestation and forest degradation, as well as the sustainable management of forests, and the conservation and enhancement of forest carbon stocks in developing countries.

Meanwhile, the Architecture for REDD+ Transactions Environmental Excellence Standard (ART-TREES) is a globally-recognised standard for the sale of carbon credits.

Since 2009, Guyana has received a total of NOK $1.5 billion – about US$220 million – as results-based payments from Norway, under the first phase of the LCDS. These funds have been invested in the country’s low carbon development, financing renewable energy, flood protection, green job creation, as well as land titling and development of funds for indigenous peoples.

Under the Amerindian Land Titling (ALT) program, some 13 villages have already been issued with absolute grants – with the most recent community being Yupukari in Region Nine. In May, the village was given a land extension of 145 square miles – three times the original size of the village. Twenty-one villages were demarcated and 19 were issued with Certificates of Title — the final step in the titling process.

This has brought the total number of villages demarcated and issued titles to 96.

The LCDS 2030 will continue to strengthen Amerindian participation in REDD+ and the implementation of the opt-in mechanism, as well as the principle of Free Prior and Informed Consent (FPIC) will continue to be applied under this project.

In relation to the benefits of forest carbon services, and within the framework of the LCDS and the Guyana-Norway Partnership, the opt-in method has been identified as another mechanism to enable the participation of indigenous peoples and other local forest communities in the planning and implementation of Guyana’s REDD+ program.