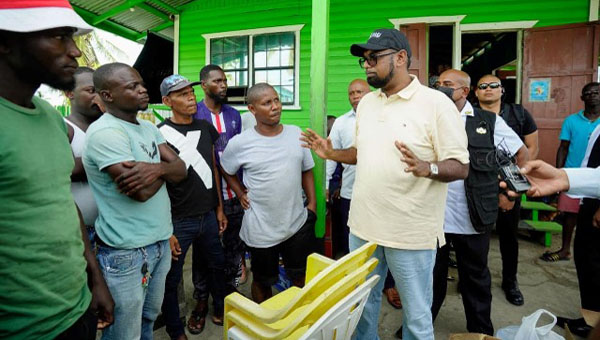 EAST COAST DEMERARA, Guyana (Wednesday, June 29, 2022) — President, Dr. Mohamed Irfaan Ali, on Tuesday, visited Mon Repos and Buxton, on the East Coast of Demerara, following protest actions over the death of Quindon Bacchus, which resulted in the destruction of stalls, the burning of vehicles and robberies.

While speaking to residents at Buxton, President Ali called for persons to be patient, as the Police Complaints Authority is working to conclude the report on the shooting incident, by Monday.

“I called the Commissioner and the Chairman, and they assure me the report will be completed, early next week, hopefully, on Monday,” he said, while noting that he cannot intervene in an independent investigation.

The President however, stated that while justice must be served for Quinton Bacchus, it cannot mean injustice for others. “Justice has to be served, but justice doesn’t mean you have to burn down people stall and burn their cars and beat them up.”

At Mon Repos, the President assured that vendors, who were affected by looters, will be fully compensated for their losses;, and that all those, who were involved in the destruction of properties, will face the full force of the law. 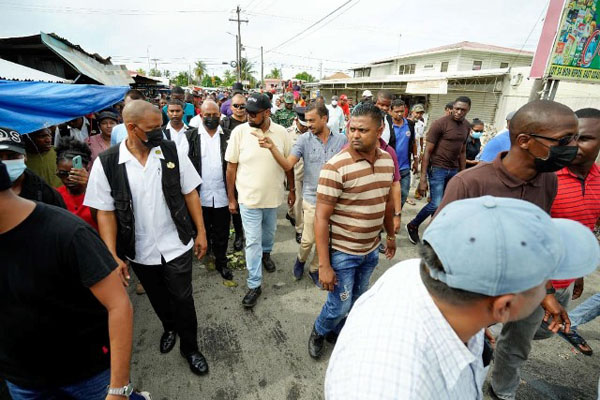 “What was done is completely wrong, and there is absolutely no excuse for it…this nonsense has to stop, and I made it clear that those, who participated in this, must be brought to justice,” he emphasised.

The Head of State added that “Everyone has a right to let their voice be heard, but no one has the right to loot and rob people.”

President Ali has called on Guyanese not to be sidetracked, and to be mindful of forces, who are seeking to destroy what the country is seeking to build, which is a ‘one Guyana’.

He has also committed to engaging the residents subsequently, to address the issue of job creation and empowerment, crime prevention and the strengthening of community policing.

“I want to see companies created out of here…I am going to come back, within a month’s time, because we are working on a system that will create opportunities, all across the areas,” he said.

Earlier Tuesday, a protest ensued on the East Coast, which stemmed from false information circulating, that the police officer, accused of using excessive force and killing Quindon Bacchus, has been released, as investigations are still ongoing.

The president has since assured residents that the officers are still in cu, adding that the Office of Professional Responsibility (OPR) is conducting its investigation.

He further explained that the process has commenced and tremendous progress has been made.