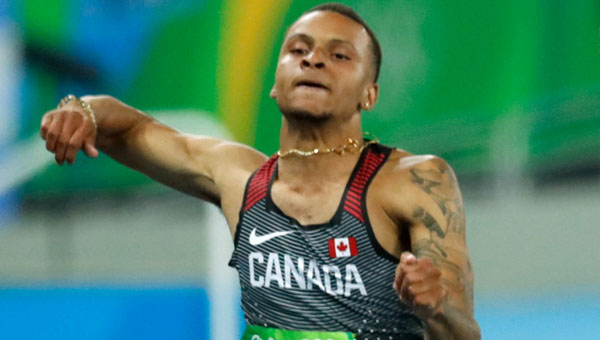 TORONTO, Ontario (Wednesday July 13, 2022) — Despite two years of virtual events, due to the COVID-19 pandemic, the 13th Annual University of the West Indies Toronto Benefit Awards gala was a sold-out, in-person affair that was held at The Ritz-Carlton on Saturday, June 25.

The successful night of celebration, gratitude and fundraising proudly showcased the theme, One Caribbean…Global Impact, and highlighted three of the many ethnicities that make up the Caribbean — Africans, Chinese and Indians. It also recognized the Indigenous peoples with a land acknowledgment, from the Caribbean, by social historian, Professor Verene Shepherd.

Host, television personality Dwight Drummond, kept the audience — that included past honourees: Dr. Gervan Fearon, Dr. Upton Allen, Frank Walwyn and Justice Michael Tulloch — engaged, throughout the-night-to-remember, highlighting the inspiring 2022 honourees:
Luminary Awardee
Andre De Grasse (born November 10, 1994) is a Canadian sprinter. A six-time Olympic medallist, De Grasse is the reigning Olympic champion in the 200 m, and also won the silver in the 200 m in 2016. He also has four Olympic bronze medals, placing third in the 100 m at both the 2016 and 2020 Games, and also in the 4 × 100 m relay in 2016 and 2020. 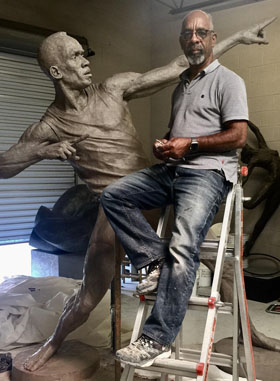 He is the son of painter Barrington Watson, and the brother of sculptor Raymond Watson. He was honoured with the Order of Distinction, Commander Class, in 2005, in recognition of his artistic accomplishments. 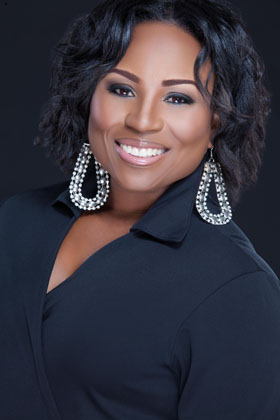 Camille Wardrop Alleyne (born Port-of-Spain, Trinidad, October 12, 1966) is an American aerospace engineer, space scientist, internationally acclaimed speaker, writer, educational leader, and science ambassador. In the highly technical fields of science and engineering where women are in the minority, she is one of the most-recognized women in aerospace engineering and one of the few women of color to serve in a senior technical management positions at the National Aeronautics and Space Administration (NASA). She is the Associate Program Scientist for the international Space Station at NASA’s Johnson Space Center in Houston, Texas.

Vice Chancellor Awardee
Walter Chin was born in Montego Bay, Jamaica to a Chinese family, and grew up there and in Canada. After graduating with a Bachelor’s Degree from Ryerson University in photographic arts, Chin moved to Paris, where as professional fashion photographer, he worked mainly for French Elle, before relocating to New York in 1990. 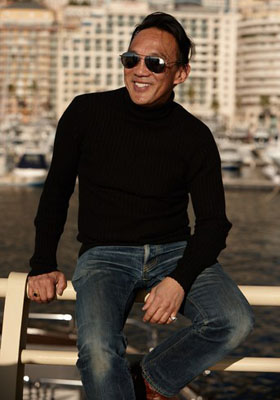 Chin’s work has been published in many magazines, including Allure, several international Vogues, Glamour, GQ, Interview, and Vanity Fair. He has also photographed advertising campaigns for designers such as Chanel, Valentino, Tommy Hilfigar, Missoni, Gap and Lancome. In addition, Neiman Marcus has selected him for many seasons to photograph their annual Art of Fashion Campaign.

Chin was listed as one of the most important people in current photography by a panel of curators, dealers, editors, and industry insiders for American Photo Magazine. His inclusion on the list cited his modernism, use of color and graphic form, and tight image cropping. The way in which his sitters appear to be constantly in motion, draws parallels with Richard Avedon and Martin Munkacsi. The first collection of his photographic work published is Work in Progress it was noted to be influential. He also published a second book, which was equally noteworthy: After Shoot.

One of Chin’s best known images, of a nude Gisele Bundchen on horseback, was published in Vanity Fair and subsequently featured in an exhibition at The National Portrait Gallery in London.

Vice Chancellor Awardee
Dr. Shakuntala Haraksingh Thilsted is the Global Lead for Nutrition and Public Health at WorldFish, a One CGIAR entity. She was awarded the 2021 World Food Prize for her ground-breaking research, critical insights, and landmark innovations in developing holistic, nutrition-sensitive approaches to aquatic food systems. She also received the 2021 Arrell Global Food Innovation Award for research innovation. 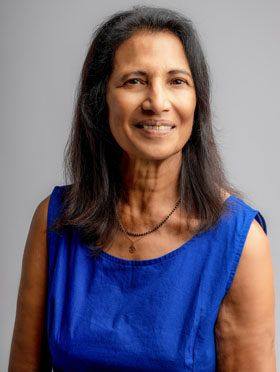 She is a member of the Steering Committee of the High Level Panel of Experts on Food Security and Nutrition (HLPE) of the United Nations Committee on World Food Security (CFS) and Vice Chair of the UN Food Systems Summit 2021: Action Track 4 – Advance Equitable Livelihoods, and also a Food Systems Champion.

Dr. Thilsted studied at the University of the West Indies at St. Augustine in Trinidad where she earned a BSc. in Tropical Agriculture in 1971. She began both her career and her life’s theme of making strides within and for a developing society as the first and only female agricultural officer in the Tobago Ministry of Agriculture, Lands and Fisheries. Two years later, she returned to Trinidad and took on her first research-centred job at The UWI’s Faculty of Natural Sciences.

She has taught and researched at the University of Dar es Salaam and the Sokoine University in Tanzania as an FAO Associate Expert; and then as the Associate Head.

Several of her projects have been funded by organizations such as USAID, the African Development Bank, the International Fund for Agricultural Development, UNICEF and the Bill and Melinda Gates Foundation. Dr. Thilsted was closely involved in the organization of the UN Food Systems Summit 2021, guiding the Summit’s work related to building sustainable and equitable food systems. She is also involved with the Global Action Network in mobilizing activities for the UN Decade of Ocean Science for Sustainable Development (2021-2030) and UN Decade of Action on Nutrition (2016-2025).

G. Raymond Chang Awardee
Janice Fukakusa is Chancellor, Ryerson University. She serves as a corporate director with extensive banking and financial services experience. She previously served as RBC’s Chief Administrative Officer and Chief Financial Officer and a member of RBC’s Group Executive, from which she retired in January 2017 following a distinguished 31-year career. 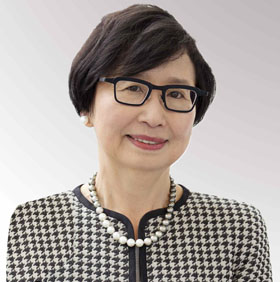 Janice currently serves on the boards of corporate and not-for-profit organizations. She is a director on the Boards of Brookfield Asset Management, Cineplex, Loblaw, Riocan, and works with various not-for–profit and charitable organizations including Chairing the Boards of the Japanese Canadian Cultural Centre Foundation, SHEEO and Chancellor of the Canadian Business Hall of Fame.

In 2021, Janice Fukakusa was appointed as a member of the Order of Canada. For her leadership and mentorship in banking, and for her boundless community engagement, notably in education and health care.

In 2007, she was inducted into Canada’s Most Powerful Women Hall of Fame and, in 2016 she was named one of the 25 Most Powerful Women in Banking by American Banker magazine for the fourth consecutive year. She was also selected as Canada’s CFO of the Year by Financial Executives Canada, PwC and Robert Half in 2014.

Although not all of the honorees were available to attend the event, their global impact and gratitude was heard through touching and inspiring video messages, while friends or family members accepted the awards on their behalf.

This year’s scholarship recipient, Jamaica-born Tajay Henry, ‘blew the audience away’ with his compelling story of loss, hope, grit, sheer determination and joy.

Over 26 Canadian organizations supported the event, led by Scotiabank, which has supported the cause for the last 13 years, and Kingsdale, Sprott Inc. and the Raymond Chang Foundation, were again premium sponsors.

Caribbean countries live in a constant state of vulnerability affected by climate change, health crises, and other economic, environmental, and social issues.

“The University is to be credited for its continued focus on providing first-class education,” said Elizabeth Buchanan-Hind, Executive Director of the University’s Institutional Advancement Division. “Given the enormous challenges encountered as a result of the COVID-19 pandemic, the welfare of students remains the primary concern of the Institution.”

The night was captivating from start to finish. When they weren’t eating delicious food with a Caribbean twist, curated by the Ritz chefs, listening to inspiring speeches, or trying to win stellar auction prizes, the guests were kept entertained with vibrant performances from the Lat Yip Dragon Lion Dance, Ballet Creole, and Geetika Dance Company. The night of celebration was then capped with dancing and live music by DJ Donovan.

The UWI Toronto Benefit Awards is a great way to come together to raise much-needed funds that provide scholarships, which empower students with an education that shapes future generations of the island nations. Supporting the UWI goes a long way in helping students, across the Caribbean, continue to dream big dreams in the face of a global pandemic.