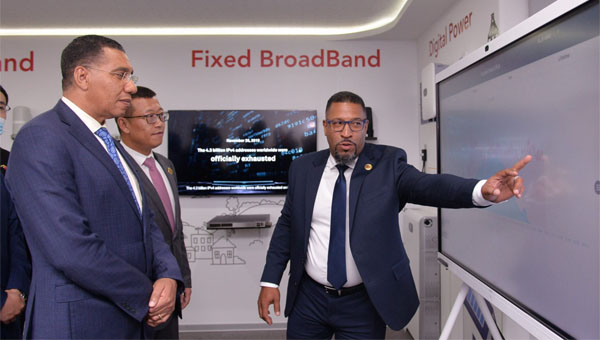 The complex has 9,000 sq. ft. of space with digital low-carbon solutions and a modern work environment for staff.

In his address at the ceremony held on Thursday, the Prime Minister said the new space signals further expansion of the company’s footprint, locally.

He lauded the company’s significant investments and contributions to the sector, which have aided in the digital transformation of Jamaica.

“The company provides cutting-edge connectivity technology and has played an essential role in the growth from GSM to UMTS wireless technology and continues to improve Jamaica’s data penetration with LTE deployments,” he said, adding that the company’s investments signal strong confidence in Jamaica.

“The investment will be of benefit to both Jamaica and the region. We welcome this investment and commend Huawei for taking this decision and look forward to their continued growth in Jamaica and in the region,” the Prime Minister added.

The Prime Minister cited the company’s commitment to protecting the Jamaican environment by ensuring that the building has a low-carbon footprint and utilises renewable energy sources.

Hailing Huawei as a critical partner in Jamaica’s digital transformation, the Prime Minister said the company provides indirect ICT jobs for more than 300 persons in Jamaica.

“Huawei provides support to customers both locally and regionally and has continued to support the Government and our economy in our ongoing quest to digitise Jamaica,” he said.

For his part, Vice President, Huawei, Latin America Region, Michael Xue Feng, thanked the country for its support over the last 15 years as the company established its roots locally.

“We are committed to the continued growth and development of Jamaica,” he said.

“As a strategic partner, China continues its cooperation with Jamaica,” the Ambassador said.

Huawei has been operating in Jamaica since 2007.