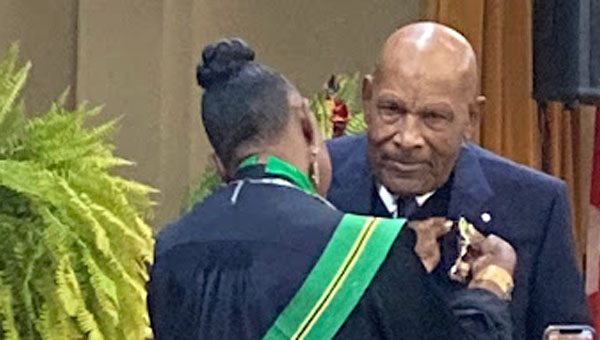 Olivia Grange (left), Minister of Culture, Gender, Entertainment and Sport of Jamaica, presents Jamaica's national honours to B. Denham Jolly at a reception in recognition of recipients in Toronto for the years 2020-2022.

TORONTO, Ontario — Businessman, former publisher, and human rights activist, B. Denham Jolly, was lionized at the Jamaican Canadian Association recently, for his contribution to the Jamaican Diaspora in Canada and philanthropy.

He was one of seven Jamaicans recognized by the government of Jamaica with national honours and awards from 2020 to 2022. A reception was held at the JCA Centre in Toronto, where Olivia Grange, Jamaica’s minister of culture, gender, entertainment and sport, presented Jolly, who was unable to attend the ceremony in Jamaica, with the Order of Distinction in the rank of officer.

Jolly and Olive Parkins-Smith, who received a Badge of Honour for meritorious service for outstanding contribution to the Jamaican Diaspora in Canada program, were the recipients for 2022.

“His life has been at the intersection of business and community, which is very, very, rare in an individual,” said Adaoma Patterson, immediate past president of the Jamaican Canadian Association (JCA), who noted that Jolly was the keynote speaker at the JCA gala in 2019 and donated the single largest donation that it had ever received — $315,000 — which paid off the mortgage.

In her tribute, Patterson described Jolly, 87, as someone who speaks truth to power and a “rare individual, who can negotiate with CEOs and support community organizations like the Black Action Defence Committee and JCA.” He is a mentor and supported Black Lives Matter and members of the JCA.

She said they were in the process of trying to get regulatory approval for a Pan-African Credit Union and she asked him to come and speak to members of the steering committee, which he did.

“Dr. Jolly has said you can’t give up; you have to have the mentality of a long distance runner and I think that exemplifies his life. Dr. Jolly, Denham, thank you for all that you do for the community, for never forgetting the community as you climbed that corporate ladder, as you achieved so much you have never left us behind, and for that we are eternally grateful.”

The credit union is an initiative of the Jamaican Canadian Association and the Lions Circle African Canadian Men’s Association aiming to establish an alternate banking option steeped in co-operative economics to better serve Black Ontarians within the Greater Toronto Region and beyond.

According to the National Credit Union Association of the United States, “minority-owned and managed credit unions play a critical role in providing financial services to communities that have been traditionally underserved or unbanked.”

In addition to providing financial services to individuals and businesses within the Black communities in Ontario, the creation of the Pan-African Credit Union (PACU) will provide financial education on topics, such as, budgeting, credit usage, credit management, financial investment and wealth-building, notes its website.

“PACU is committed to serving individuals and families from the Black Community, as well as, Black-owned businesses, with the overarching objective of inspiring tangible economic growth and inter-generational wealth within the Black Community.”

The organization has submitted its credit union application to the governing body for approval.

“You’ve all excelled in your chosen field and have made an indelible mark in the Jamaican Canadian community,” said Grange, who was conferred with the Order of Jamaica on August 6.

Lincoln Downer, Jamaica’s consul general at Toronto, noted that she is the longest serving female member of parliament in Jamaica.

“Denham Jolly is a man of the people, a business mogul, civil rights activist and I remember those days when I was running around with a big afro here in Toronto and Denny Jolly was there contributing tremendously to the growth of the community here,” says Grange describing him as a “renaissance man who transformed the Canadian landscape through his work.”

She said he had a love and commitment for community organizations such as the Jamaican Canadian Association.

In his response, Jolly, who received an honorary Doctor of Laws degree from the University of Toronto this year, said he was deeply honoured, grateful and humbled. “It was beyond my greatest dream when as a youngster in Green Island, Jamaica, riding horses and tying out the goats and shooting birds in the fields that a day like this would ever come.”

He remembered when the late Bromley Armstrong and Roy Williams, 93, started the JCA, and he was the treasurer at its first building on Dawes Road. He got a call one night that the place burnt down and they pooled their money together and bought a building on Dupont Street.

“It is always a special honour to be recognized for your contributions by your peers, but it’s even a bigger honour to recognized by the land of your birth,” says Jolly who was appointed a member of the Order of Canada in 2021.

In 2021, Dr. Upton Allen received the Order of Distinction in the rank of commander for contribution to the field of child health and care of children with infectious diseases in the Jamaican Diaspora in Canada.

The professor of paediatrics at the University of Toronto and head of the Division of Infectious Diseases at The Hospital for Sick Children (SickKids) is the lead investigator of a study assessing COVID-19 prevalence and risk factors among Black Canadian communities in Ontario.

“There’s still a lot of work that needs to be done but we’re really extremely pleased with how things have gone and how much support we’ve gotten from the Black community. And so a lot of the work that we’re doing is led by Black folks for Black folks and so we are excited about that.”

The 2020 recipients, Bishop Dr. Lennox Walker and Letna Allen-Rowe, were honoured with the Order of Distinction in the rank of officer for their outstanding service to the Jamaican diaspora in Canada. Walker was also recognized for his contribution to religion.

In a special tribute to his sister, Hamlin Grangesaid, when he thinks of his sister — Olivia Grange — he thinks of someone who has constantly been at the centre of things Jamaican in Canada as well.

He said many years ago his sister made the decision to leave Toronto and return to Jamaica to follow her passion and she continues to live that passion today. He does not know where she gets her energy.

“Olivia, alongside Al Hamilton and others founded Contrast newspaper. She was also an assistant to an investigator at the Ontario Human Rights Commission; she was a model as well.

“Olivia put reggae music on the map of this country.” He remembers spending some late nights in a van going to concerts and shows at some of the universities, colleges with Ernie Smith, groups such as Messenjah, Truths and Rights, and Carlene Davis.

In his roll call of others who have contributed, Hamlin included Bromley Armstrong, Dr. Wilson Head, Mel Thompson, and Al Mercury. “When the history of this community is written Olivia’s name will be there, should be there,” he said. The program included remarks or presentations by Kashane Denton, chairperson, Global Jamaica Diaspora Youth Council; Bishop James Robinson, Faith Open Door Ministries; David Betty, president, Jamaican Canadian Association; and Paulette Sterling, senior manager, JN Group. Audrey Campbell, a past president of the JCA, was the compere.