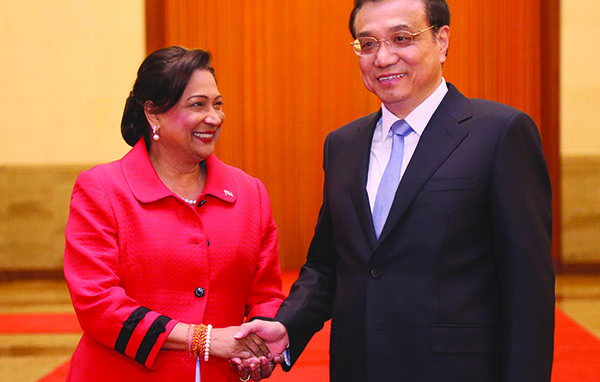 PM Says China To Provide Vessel To Trinidad And Tobago

BEIJING, China CMC – Prime Minister Kamla Persad Bissessar Tuesday, described as “good news” the announcement by China that it would deliver a Long Range Vessel (LRV) to the Trinidad and Tobago Coast Guard.

Prime Minister Persad Bissessar, who is on an official visit to the Asian country, said that she had been able to convince Premier Li Keqiang, that the Trinidad and Tobago Coast Guard needed two vessels to help deal with the increase in arms and narco trafficking.

A government statement issued here said that the Trinidad and Tobago delegation had come to the talks with a list of proposals seeking Chinese assistance.

“We are here today to further the partnership we started 40 years ago. I am hoping that you could use your good office to drive these projects,” Prime Minister Persad Bissessar told her host.

She said she was aware that China was building two LRVs and pleaded with Li Keqiang to sell one “in the shortest possible time.”

The statement said she also sought assistance from China on the establishment of a National Operations Centre (NOC), saying that a Chinese company was already interested in such a project.

The statement said that a team from the Trinidad and Tobago Coast Guard had visited Beijing recently and proposed that Port of Spain acquire one LRV “right away.”

“Both the Governments of China and Trinidad and Tobago will sit down and deal with the financing aspect of the purchase,” the statement said.

It added that during her discussions the Trinidad and Tobago leader sought assistance on the construction and design of six new Economic Zones in Trinidad and Tobago; development of a trans-shipment Port and Dry Dock in South Trinidad, construction of two new hospitals and the removal of asphalt from the Pitch lake in greater capacities.

The discussions also centered on the early processing of a loan agreement with the China Exim Bank “so these projects can be expedited”.

The statement said that the Trinidad and Tobago delegation also signed four agreements in the areas of health, sport, energy and civil aviation.