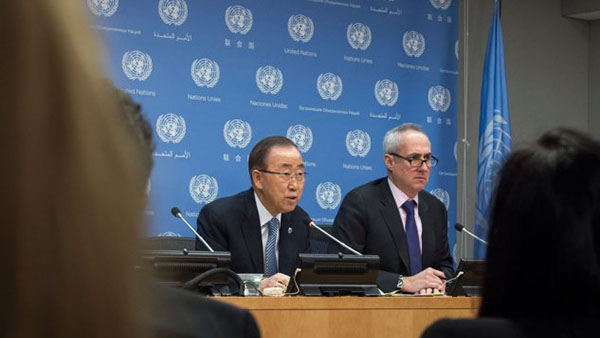 Secretary-General Ban Ki-moon (left) addresses a press conference, his last at United Nations headquarters, as his term of office draws to a close at the end of the year. At his side is his spokesperson, Stéphane Dujarric. Photo credit: UN Photo/Eskinder Debebe.

GEORGETOWN, Guyana, December 18, 2016 (CMC) – Guyana has welcomed the position of outgoing United Nations Secretary General, Ban Ki-moon, that its border dispute with Venezuela be subjected to at least one more year of mediation.

“The government of Guyana accepts the decision of the Secretary General. We stand committed to using our best endeavours to fulfill its highest expectations. The government will be writing formally to him, as well as to the President of Venezuela, to indicate our acceptance of this decision,” the Ministry of Foreign Affairs said in a statement.

It warned that “if, at the end of that period, the Secretary-General concludes that significant progress has not been made towards arriving at a full agreement for the solution of the controversy, he will choose the International Court of Justice (ICJ) as the next means of settlement, unless the governments of Guyana and Venezuela jointly request that he refrain from doing so”.

Georgetown said that in taking this decision, the Secretary General has remained loyal to the sacred mission of the United Nations to uphold the law and maintain the peace between nations – small and large.

“Guyana pledged to do everything in its power to ensure that his expectations, and those of his successor, to whom the mandate of implementation now falls – as well as our expectations — are fulfilled.

“The government calls upon all Guyanese to support the process that now lies ahead, in the confidence that it will lead to a just and binding resolution of the discords that have plagued our development for so long. It is a fitting advance in this fiftieth year of our independence. May God continue to bless our nation in this noble cause,” the statement added.

In a statement, the UN Secretary General, who demits office at the end of this month, said 50 years ago, shortly before Guyana’s independence in 1966, the Geneva Agreement was signed with the aim of amicably resolving the controversy that had arisen as the result of the Venezuelan contention that the Arbitral Award of 1899 is null and void.

“Within the framework of the Geneva Agreement, a Good Offices Process under the Secretary-General has been in place for the last 25 years in order to find a solution to the controversy. This process has so far involved three Personal Representatives of the Secretary-General (PRSG). In spite of these efforts, it has not been possible to bridge the differences between the parties.”

The Secretary General said he has engaged in intensive efforts to find a way forward that would be most conducive to finding a solution.

He has held a trilateral meeting with President David Granger of Guyana and President Nicolás Maduro of Venezuela in the margins of the 70th General Assembly.

The Secretary General has subsequently dispatched several high-level missions to both capitals and held meetings at the highest level with both parties. In November of this year, he conducted an extensive stocktaking of the Good Offices Process.

“On the basis of that stocktaking, the Secretary General has reached the conclusion that the Good Offices Process will continue for one final year, with a new PRSG with a strengthened mandate of mediation, who will be appointed by the Secretary-General-designate shortly after he takes office.

“If, by the end of 2017, the Secretary General concludes that significant progress has not been made toward arriving at a full agreement for the solution of the controversy, he will choose the International Court of Justice as the next means of settlement, unless both parties jointly request that he refrain from doing so,” the statement noted.

It said that Ki-moon had discussed these conclusions with the Secretary-General-designate, who has expressed his concurrence with them.

Venezuela’s Foreign Minister, Delcy Rodríguez, in a note posted on her Twitter account, said that the position of the outgoing Secretary General “is the victory of the Bolivarian Diplomacy of Peace, led by President Nicolás Maduro, who maintained the position of Venezuela on Good Offices”.