New in Pride
Home / International News / Kenya Bans Manufacture, Import And Use Of All Plastic Bags

Plastic bags are also a major contributor to the 8 million tonnes of plastic dumped in the sea every year. Photo credit: UNEP.

Kenya Bans Manufacture, Import And Use Of All Plastic Bags

ROME, Italy April 5, 2017 (IPS) — Good news: Kenya has just joined the commitment of 10 other countries to address major plastic pollution, by decreeing a ban on the use, manufacture and import of all plastic bags, to take effect in six months.

The Kenyan decision comes three weeks after the UN declared a “war on plastic”, through its new UN Clean Seas initiative, launched at the Economist World Ocean Summit in Bali (February 22-24, 2017).

The initiative’s campaign urges governments to pass plastic reduction policies; industry to minimise plastic packaging and redesign products; and consumers to change their throwaway habits, before irreversible damage is done to our seas.

“Plastic waste also causes immeasurable damage to fragile ecosystems – both on land and at sea – and this decision is a major breakthrough in our global effort to turn the tide on plastic.”

Some 100 million plastic bags are handed out every year in Kenya, by supermarkets alone, the UN informed, adding that, long identified as a major cause of environmental damage and health problems, they kill birds, fish and other animals that mistake them for food, damage agricultural land, pollute tourist sites and provide breeding grounds for the mosquitoes that carry malaria and dengue fever.

More Plastic Than Fish
According to UNEP, plastic bags are the number one challenge for urban waste disposal in Kenya, particularly in the poorest communities, where access to disposal systems and healthcare is limited.

They also contribute to the 8 million tonnes of plastic that leak into the ocean every year. At current rates, by 2050, there will be more plastic in the oceans than fish, wreaking havoc on marine fisheries, wildlife and tourism.

Biodegradable plastics are not the answer to reducing marine litter. Photo credit: UNEP.

Kenya, which on March 15 announced its decision to ban plastic bags, is now the 11th country to take action in support of the UNEP’s campaign. Also in Africa, Rwanda and Morocco have already banned plastic bags, and other countries are set to announce measures in the coming weeks.

At that Bali Summit, Indonesia committed to slash its marine litter by a massive 70 percent by 2025; Uruguay will tax single-use plastic bags later this year, and Costa Rica announced measures to dramatically reduce single-use plastic, through better waste management and education.

Canada added micro-beads (tiny particles of plastic) to its list of toxic substances, and New Zealand, the UK and the US announced bans on micro-beads in cosmetics.

According to estimates, at the rate we are dumping items such as plastic bottles, bags and cups after a single use, by 2050, oceans will carry more plastic than fish and an estimated 99 percent of seabirds will have ingested plastic.

Sweden’s Strong Push
Isabella Lövin, Sweden’s Deputy Prime Minister and Climate Minister told IPS in an interview that the world is going “in the totally wrong direction”, when it comes to achieving the goal of sustainable oceans and life below water.

“If you look at the trends right now, you see more and more overfishing, we are seeing more and more pollution, plastic litter coming into our oceans, and we’re also seeing all the stress that the ocean is under, due to climate change, acidification of the water, but also the warming and sea level rises,” Lövin added.

Together with Fiji, Sweden is convening a major UN Ocean Conference on June 5-9 this year. The Conference aims to bring together governments, the private sector and civil society organisations to create a more coordinated approach to sustaining oceans.

It will look at the key role that oceans play in climate change, but also other issues such as the alarming prospect that there will be more plastic in our seas than fish by the year 2050.

“There’s 3 billion people around the world that are primarily dependent on marine resources for their survival, and so they depend on what the ocean can produce, so it’s about food security, it’s also about livelihoods for hundreds of millions of people that depend on small scale fisheries, mostly in developing countries,” Lövin explained.

“Rich countries … have been over-fishing with industrial methods for decades and now, when the European oceans are being emptied, more or less, we have depleted our resources and then we import and we fish (over long distances in) developing countries’ waters.

“We need to make sure that fish as a resource is conserved and protected for future generations,” she said.

Norway-FAO Advanced Oceanic Research
In line with these efforts, Vidar Helgesen, Minister of Climate and the Environment of Norway, said at the Bali Summit: “Keeping our seas clean and our marine life safe from plastic, is a matter of urgency for Norway. Marine plastic litter is a rapidly increasing threat to marine life, seafood safety and negatively affects the lives of people, in coastal areas, all around the world. Our oceans cannot wait any longer.”

On March 24, Norway and the UN Food and Agriculture Organization (FAO) launched a brand new, state-of-the-art marine studies vessel, among the most advanced of its kind — and the only research ship on the globe that flies the UN flag. 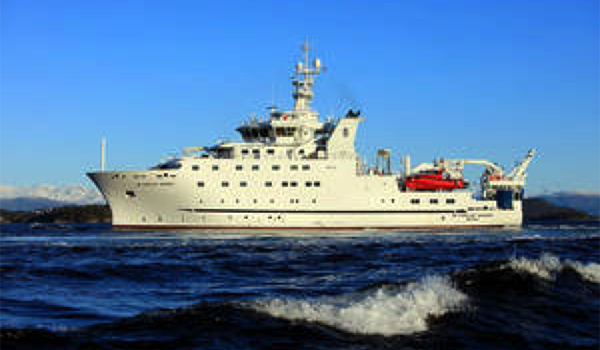 The new Dr. Fridtjof Nansen is one of the most advanced marine vessels sailing today. Photo credit: FAO.

Its mission: to investigate some of the planet’s least-explored oceans, using cutting-edge technology and sophisticated equipment to help developing countries assemble scientific data critical to sustainable fisheries management and study how a changing climate is affecting our oceans.

As the only research ship on the planet flying the UN flag, the Dr. Fridtjof Nansen is able to sail freely across different jurisdictional boundaries, unfettered in its pursuit of natural resource challenges that transcend borders.

Speaking at the ship’s naming ceremony in Oslo, Norwegian Prime Minister, Erna Solberg, stressed that both science and international collaboration will be key to implementing the 2030 Development Agenda.

“Norway, with our long coastline and ocean culture, understands the importance of SDG14, with its goal of protecting our oceans. We know this cannot be done by any one country on its own. It requires us all to do our part, and Norwegian-FAO cooperation on the Nansen is an example of collaborating with developing countries to achieve this,” she said.

“This new vessel allows us to improve research and activities where marine observations are extremely limited, and better understand the impacts of climate change on aquatic ecosystems and our oceans,” said FAO’s Director-General, José Graziano da Silva.

“This is crucial to enable developing countries to increase the resilience of ecosystems and coastal communities, especially regarding small-scale fisheries,” he added.