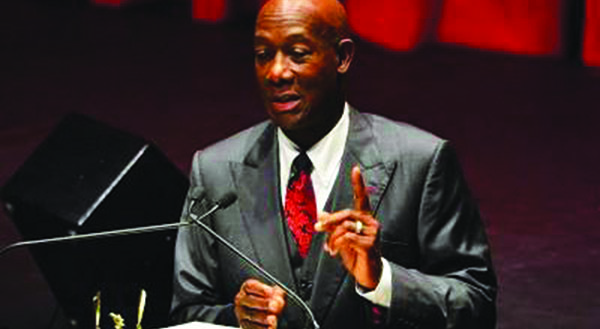 Trinidad PM Says He Has Been Given Clean Bill Of Health

PORT OF SPAIN, Trinidad and Tobago, August 18, 2016 (CMC) – Prime Minister, Dr. Keith Rowley, today, said he had been given a clean bill of health by his doctors overseas, hinting also that he had undergone tests for prostate cancer in the United States.

He brushed aside suggestions that he was terminally ill and thanked persons, whom he said had communicated with him and sent good wishes during his two week vacation in the United States, where he also underwent several other tests.

“Until the tests were done, there was nothing to report,” Rowley said in response to the widespread speculation that had engulfed the country, following his announcement that he was going overseas for medical tests.

“I have no ailment, I had no symptoms which can prevent me, at this point in time, from conducting the duties to which I have been assigned in Trinidad and Tobago,” Rowley said, reiterating the point that men of African descent must make themselves fully aware of the science regarding prostate cancer.

“The science shows that we have this propensity to have a very high frequency of prostate cancer, and the response to it is to get yourself examined regularly after a certain age. One can choose to do it, or not do it,” he told reporters at the end of the weekly Cabinet meeting here.

He told reporters that he had been undergoing tests, annually, so as to ensure that he could benefit from the treatment for any ailment detected early.

Rowley, 66, defended his decision to make any public announcement regarding his health, saying it is a personal matter, regardless of what office you hold.

“The choosing of a doctor for a citizen is entirely personal and, of course, the information supplied to you, as an individual, and to me, first and foremost as an individual, concern about my personal health, prime minister or no prime minister, the conversation between me and my doctor is private, and would be made public only in so far as it is available to the public so the public can understand whether I am in a position to continue to discharge my duties”.

He recalled that when he left here on August 4 “no such situation existed and throughout, I read with great interest what was said and from what quarters they came”.

“I think this is a good opportunity for me to say this is a learning experience, because I always maintained in this political arena, in which I perform, that I have a genuine belief that the vast majority of people in Trinidad and Tobago are descent right-thinking people, who wish well for all of us,” he said.

Rowley said he was appreciative of the message of goodwill sent to him and his family “and it was good to be relieved after the tests were done, to show that after this year’s test, I had nothing to worry about”.

Both the main opposition United National Congress (UNC) and the Congress of the People (COP) had called on Rowley to disclose the nature of his illness.

“It is our view that the Prime Minister’s health is the business of Trinidad and Tobago, and in his position as Prime Minister, he cannot say it is private and confidential, said Mahabir.

“We wondered since it is reported that he will be hospitalised in North America for a few days to do his test, and also the fact that the local doctors referred him abroad to have further tests, how serious is his medical condition? And is it going to affect the ability to perform his duties in the near future?”

Former minister of gender, youth and child development, Verna St. Rose Greaves, said there is speculation that Rowley is suffering from “throat cancer” and took to her Facebook page to recall the speculation about her health after she had cut off her hair.

During the news conference in which he said he had undergone a “whole range of tests” while in the United States, Rowley defended the decision for persons in employment to make sure they take holidays so as to be rejuvenated for the task ahead.

He said over the past two years, political activities in Trinidad and Tobago had prevented him from exercising his option of annual vacation, even though he had kept his disciplined approach and getting himself checked locally.

“Having gone, my local doctors saw something which was of interest to them that was communicated to my foreign doctors, and they said we will examine further, and I made that information available to the public.