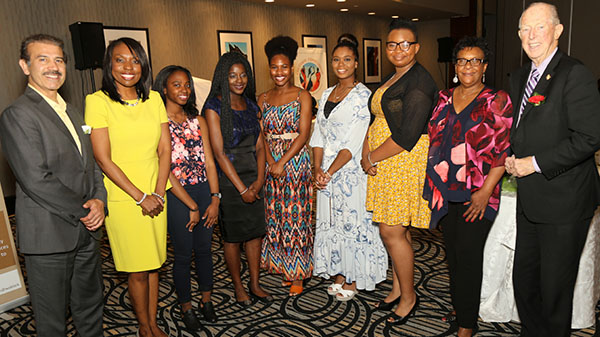 AJAX-PICKERING, Durham August 30, 2017 — Since its establishment in March 1996, the Ajax/Pickering chapter of the Congress of Black Women of Canada (CBWC) has been making diverse contributions to the Ajax/Pickering community, with a direct focus on Black women and youth, arguably Canada’s most valuable resource.

The CBWC was birthed in Toronto in 1973, at a meeting, chaired by Kay Livingstone, the Founding President of the Canadian Negro Women’s Club, an organization of, and for, Black women, formed in 1951.

The Club was later renamed the Canadian Negro Women’s Association, which sponsored the meeting and was the principal organizer of the military-style, annual Emancipation Day Parade, held in November each year during the 1950’s.

Verda Cook, one of the leaders of the Association, was also a Founding Director of Caribana, which is now known as the Peeks Toronto Caribbean Carnival.

Discussions at the initial meeting of the founding executives, revolved around common concerns of Black women that gave birth to a national organization for Black women.

The main objectives of the new organization, the Congress of Black Women of Canada, were/are:

(a) To provide a dynamic forum for Black women to examine and discuss issues relevant to and affecting them and their families, and to develop solutions to bring about constructive change.

(b) To plan and implement a program of service and action, geared to the needs of Black women in Canada.

(c) To provide a network of solidarity for Black Women in Canada and to be a united voice in the defence and extension of human rights and liberties for Black women in Canada.

(d) To develop relations with other local, national and international organizations whose aims, objectives and purposes are in keeping with those of the Congress, with a constant plan to re-examine objectives and efforts.

It was registered in Ontario in 1990, and since then, chapters were established in Ajax/Pickering, Whitby/Oshawa, Mississauga, Toronto, Hamilton, Sudbury, North York, Scarborough, Brampton, Windsor, London and Waterloo.

The CBWC has dealt with issues such as racism as a health hazard; Blacks and the justice system; economic empowerment and the Black woman; youth and education; pay equity, immigration; racial profiling; institutionalized racism, health care, multiculturalism; Human Rights Commission complaints; won a human rights settlement for one Filipino and seven Black nurses; opened a 9-storey, non-profit housing complex, as well as a 14-storey co-op housing complex as a result of collaboration with the Coalition of Visible Minority Women; produced an anti-racism child care strategy film; and much more.

The Ajax/Pickering Chapter, specially, since its establishment has been an invaluable community resource for parents, youth, new comers to Canada and community members, as it provides assistance and referrals to appropriate community and government agencies.

It is a single point of contact for Black women in the Ajax/Pickering area and is committed to uplifting, supporting and celebrating the Black family, through Black women, while it nurtures positive change in the community.

Over the past 21 years, it has facilitated interactive panel discussions on trending topics related to health, parenting and financial planning; awarded over 55 scholarships to residents of the Durham Region, supporting their aspirations in pursuit of a higher education; offered a summer camp financial assistance program, and March break workshops for students; provided educational forums; organized Black History Month initiatives; partnered with Netball Ontario to offer a netball program  for youth; hosted annual children’s Christmas parties; and is currently hosting a free 7-week Steel Pan Program for youth, between the ages of 8 and 16, for which full funding was provided by Impact Ajax, and which accepted 52 registrants.

In June of this year, under the theme, “Honouring the Past, Treasuring the Present, Shaping the Future”, the Ajax-Pickering chapter held its 18th Annual Scholarship Brunch at the Ajax Convention Centre, during which it awarded scholarships to the following five deserving young ladies.

Vanessa Baptiste, a student of Pickering High School, who will be pursuing studies in Accounting at Carleton University.

Rebekah Anderson, a student of Pickering High School, who will be pursuing studies in Criminology at York University.

Shevien Rhule, a student of Pickering High School, who will be pursuing studies in Science and Technology at Ottawa University, as she aspires to be a Materials Engineer.

Tiera Sandiford, a St. Mary’s Catholic Secondary School student, who will be attending the University of Toronto to pursue studies in Political Science, after which she will proceed to Law School

And Kiara Picart, a Sinclair Secondary School student , who will be pursuing studies in a double honours program in Communications and Political Science at Ottawa University, as she aspires to be an advocate for Black families.

The event was supported and attended by federal, provincial and local politicians — including members of the Senate — and the Keynote Address was delivered by Mitzie Hunter, Ontario’s Minister of Education.

She further said that the government shows respect for their contributions, and recognizes the role of treaty-making in what is now Ontario saying, “Hundreds of years after the first treaties were signed, they are still relevant today”.

Hunter commended the tireless efforts of the CBWC in supporting young women in pursuit of their dreams, and recognized the continuous positive impact the organization has on the lives of women, saying that the legacy of Kay Livingstone, its founder, lives on, as it continues to fulfil her great vision of community involvement, pride and excellence.

She stated that as she read the biographies of the awardees, she was very impressed with their ambition, tenacity and drive to achieve and succeed. The Minister commented that she saw them as shining examples of what is possible with community support, love and hard work; and not only are they future leaders, but she sees them as leaders today.

However, the main message she left with the awardees was: “Continue to dare to be powerful. Your work, your discoveries and your innovation will help shape the future of this great province.

“It is truly a great time to be a young, Black woman, and although more work needs to be done to fulfill the promise of equity for all, we live in a country and in a province where your abilities and talent can be nurtured, and where opportunities can be limitless.

“As we celebrate Canada’s and Ontario’s 150th Anniversary, I would like to reiterate the Ontario government’s commitment to equity, and I am proud that our government is making strides in removing systemic barriers. Ontario’s education system is preparing Ontario’s students for success.

“So, continue to embrace and nurture those values of determination, flexibility, innovation, curiosity, respect and integrity, which have made you successful so far.”

It is obvious that the Congress of Black Women of Canada is a necessary organization in Canadian society today, and must be commended for all its efforts, but I would like to see the Congress play a more important part in our school system and, more importantly, in individual schools in which they can lobby and impress upon school boards, superintendents, principals, teachers and guidance counsellors, the importance of demonstrating fairness not only in discharging discipline, and the overall treatment of Black students, but in the marking system as well. These would definitely improve the morale of all students, especially Black students.

Also, I would like to see the Congress play a more active role in soliciting the engagement of Black parents in the school system and its activities.

Although I recognize the hard work of the Founders, Presidents, Past Presidents, Executives and members, past and present, of this important organization, as well as all the Black women of the struggle who have gone before us, I would be quite remiss, if special recognition was not given to the hard work and continued efforts of Dr. Jean Augustine.

A National Past President of the CBWC, Augustine was extremely instrumental in the establishment of Black History Month in Canada, and continues to present herself as a powerful role model for Black women everywhere – young and old.

In 1992, the CBWC established a foundation, The National Congress of Black Women Foundation with its headquarters located in Vancouver, BC.

The Ontario Chapters report to the Ontario Regional Representative, Loris Thomas, who supervises the business of the Congress in Ontario, serves as a liaison to the local chapters providing support and maintains communication strategies with other community organizations and government institutions.

Upcoming events of the Ajax/Pickering Chapter are: an August 19 fundraising bus trip; a fitness fundraiser in September; an October Education Forum, and the Annual Children’s Christmas Party on December 10.