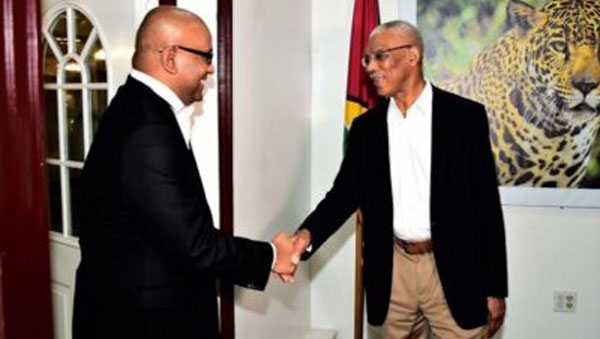 GEORGETOWN, Guyana, January 4, 2019 (CMC) – President David Granger and Opposition Leader, Bharrat Jagdeo, are scheduled to meet, on Wednesday, next week, for the first time since Jagdeo successfully tabled a motion of no confidence against the Guyana government, late last month.

Minister of State, Joseph Harmon, said that Granger — who returned yesterday from receiving medical treatment for cancer in Cuba — had instructed him to write Jagdeo, requesting a meeting on January 9, at 11:00 am (local time) s at the Ministry of the Presidency.

Harmon said that the coalition government is also awaiting a response from Jagdeo, as to the matters he would like to be addressed at the meeting.

The coalition – A Partnership for National Unity (APNU) and the Alliance For Change (AFC) – suffered a major blow in the Parliament on December 21, when one of its members, Charrandass Persaud, sided with the motion by Jagdeo, the General Secretary of the main opposition People’s Progressive Party (PPP) to give it a 33-32 victory in the 65-member National Assembly.

The PPP has since called on the government to name the date for fresh general elections, which it says must be held before the end of March this year.

On Thursday, Barbara Patricia Pilgrim was sworn in as the new member of the National Assembly, replacing Persaud, who was officially expelled from the AFC and consequently, the Parliament.

The government also announced that it would be filing in the High Court, today, a challenge to the motion of no confidence, following the decision of the Speaker, Dr. Barton Scotland, that the Courts should make the final determination on the December 21, 2018 vote.

Nagamootoo said it is now up to the Court to decide if the total number of votes required for the motion to be carried is 34 or 33, among the other considerations presented in several “strong” and “compelling” arguments presented to the Speaker.