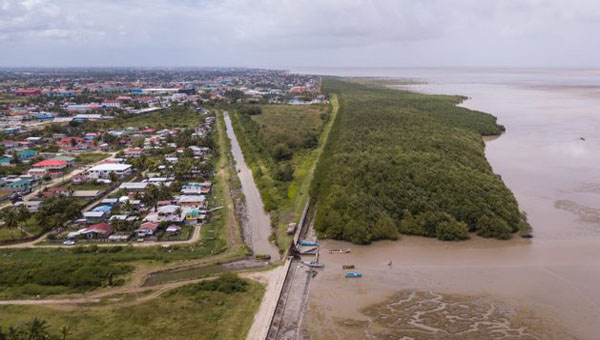 An aerial view of a mangrove forest along the Guyana coast. Approximately 90 per cent of Guyana’s population lives on a narrow coastline strip a half to one metre below sea level. Photo credit: Ministry of the Presidency/OCC/Kojo McPherson.

Environmental Funding For Guyana Must Cater For Mangroves Too

GEORGETOWN, Guyana March 8, 2019 (IPS) — For several decades, Guyana has been using mangroves to protect its coasts against natural hazards, and the country believes its mangrove forests should be included in programs like the REDD+ of United Nations, in order to access financing to continue their restoration and maintenance, as they complement miles of seawalls that help to prevent flooding.

In recent years, the seawall barriers, which have existed since the Dutch occupation of Guyana, have been breached by severe storms. This resulted in significant flooding, a danger which scientists predict could become more frequent with climate change.

The seawalls must also be maintained, and this is at an enormous cost for Guyana which has been spending an average of 14 million dollars a year to maintain and strengthen the defences.

Joseph Harmon, Minister of State in the Ministry of the President of Guyana, said given the importance of mangroves, they should factor more in discussions about financing to help countries build resilience to natural hazards and climate related risks.

“While we look at climate change, while we look at sustainable livelihoods, we have a forest that is so inaccessible, but the areas that are accessible are also threatened,” Harmon told IPS.

“The fact that we’re on a low coastal plain, the issues of environment and environmental funding must cater for mangroves as well.”

Approximately 90 percent of Guyana’s population lives on a narrow coastline strip a half to one metre below sea level, and Harmon said almost 80 percent of the country’s productive means are on the coast as well.

“We’ve actually started, several years ago, with the establishment of mangroves as a form of defence from rising sea levels,” he said.

“We would want to posit that in the way in which forest coverage calculations are done, that mangrove protection, which protects the persons on the coast, that must also be a feature of your forest coverage because it does the same thing as the forest in the hinterland.”

According to the Nature Conservancy and Wetlands International, mangroves don’t always provide a stand-alone solution, and may need to be combined with other risk reduction measures to achieve high levels of protection.

As is the case with Guyana, appropriately integrated mangroves can contribute to risk reduction in almost every coastal setting, ranging from rural to urban and from natural to heavily degraded landscapes. 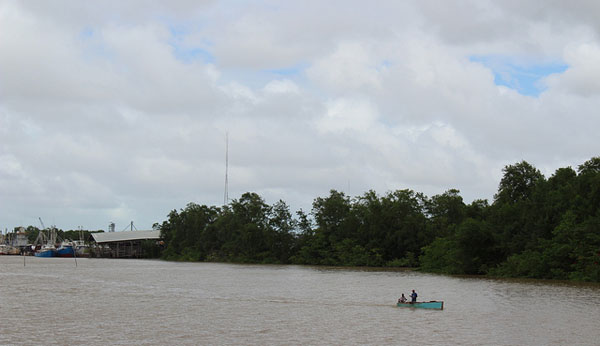 Mangrove trees grow along the bank of the Demerara River, which rises in the central rainforests and flows to the north for 346 kilometres until it reaches the Atlantic Ocean. Photo credit: Desmond Brown/IPS.

Janelle Christian, the Head of the Office of Climate Change in Guyana, said the mangrove forests provide livelihood opportunities for residents of many coastal communities.

“There are a lot of coastal community women’s groups involved in beekeeping and honey production,” Christian told IPS.

“Along where many of the mangrove forests are located you also have fishing communities. So, for us, it is important both as a form of natural protection and also because of the livelihood opportunities tied to that.”

In 1990, the total area of mangrove forest in Guyana was estimated at 91,000 hectares, according to a country report to the United Nations Convention on Biological Diversity. By 2009, this figure stood at 22,632 hectares, notes the same report.

But the country has been on an intensive campaign to protect and restore its coastal mangroves. Christian said in 2010, Guyana started a mangrove restoration project funded by a partnership between the Government of Guyana and the European Union.

The project’s overall objective was to respond to climate change and to mitigate its effects through the protection, rehabilitation and wise use of mangrove ecosystems through processes that maintain their function, values and biodiversity, while meeting the socio-economic development and environmental protection needs in estuarine and coastal areas.

More than 141 hectares of mangrove forest has been restored along Guyana’s coastline since rehabilitation efforts began. The country has about 80,000 hectares in place and continues to accelerate the growth of mangroves, many of which were lost 30 years ago.

“Going along the coast you will see mangrove regrowth in several areas where they were diminished,” Christian said, pointing to the success of the project.

“It’s an important natural mechanism against floods. It also helps in terms of land reclamation because over time the roots of the mangrove allow for sedimentation and so there’s a build-up of land.”

“So, there are livelihood opportunities that are tied to mangrove-type forests,” Christian said.

Other traditional applications include using the bark of red mangrove trees for tanning leather. It sells for approximately 100 dollars per pound. The leaves of black mangrove trees are used by locals in cooking.