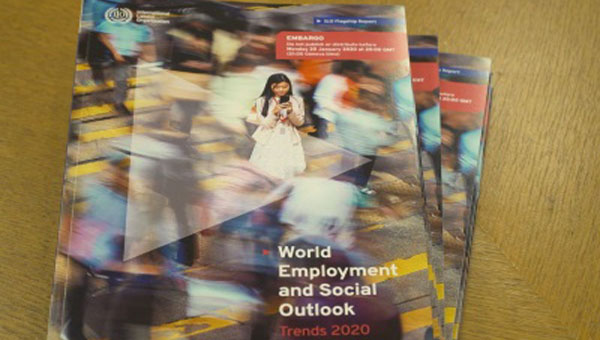 GENEVA, Switzerland January 21, 2020 (CMC) – The International Labour Organization (ILO) says while a significant number of women in Latin America and the Caribbean have been able to attain higher education than men, they are still earning less than their male counterparts.

In its “World Employment and Social Outlook: Trends 2020” (WESO) publication, released, here, yesterday, it also noted almost half a billion people are working fewer paid hours than they would like or lack adequate access to paid work.

“In Latin America and the Caribbean, for example, the average level of educational attainment of women now surpasses that of men, yet women in the region still earn 17 percent less, per hour worked, than men,” the ILO report noted.

It said that contemporary labour markets also continue to be characterized by gender inequality.

The ILO reported that last year, the female labour force participation rate was just 47 percent, 27 percentage points below the male rate at 74 percent.

“There is strong regional variation in gender disparities in access to employment. Gender stereotypes that emphasize the role of women as the main caregivers and that of men as the main breadwinners, remain deeply ingrained in some regions.”

The ILO report notes also that substantial inequalities in the labour market prevail.

“To begin with, a person’s geographical location strongly determines his or her likelihood of finding paid work that is of good quality. Low-income countries have the highest employment-to-population ratio (68 percent), as many vulnerable workers are forced to take up any job, regardless of its quality”.

The ILO said that while time-related underemployment affects only around one percent of all workers, both in North America and in Eastern Europe, it affects eight percent of the employed in Latin America and the Caribbean, and up to 13 percent in low-income countries, worldwide.

“Even when people have a job, there remain significant deficiencies in work quality. Decent work concerns the adequacy of wages or self-employment earnings; the right to job security and a safe and healthy workplace; access to social protection; the opportunity to voice one’s views and concerns through a trade union, employers’ organization or other representative body; and other fundamental rights, such as non-discrimination.

“Decent work deficits are especially pronounced in the informal economy, which registers the highest rates of in-work poverty, and high shares of people, who are own-account self-employed or contributing family workers, who lack adequate protection.”

The “World Employment and Social Outlook: Trends 2020” shows that unemployment is projected to increase by around 2.5 million in 2020.

The ILO said that global unemployment has been roughly stable for the last nine years, but slowing global economic growth means that, as the global labour force increases, not enough new jobs are being generated to absorb new entrants to the labour market.

“Persisting and substantial work-related inequalities and exclusion are preventing them from finding decent work and better futures. That’s an extremely serious finding that has profound and worrying implications for social cohesion,” he said, adding “for millions of ordinary people, it’s increasingly difficult to build better lives through work”.