New in Pride
Home / National News / Canada Must Not Be Complicit In The U.S. Assault On Central American Refugees 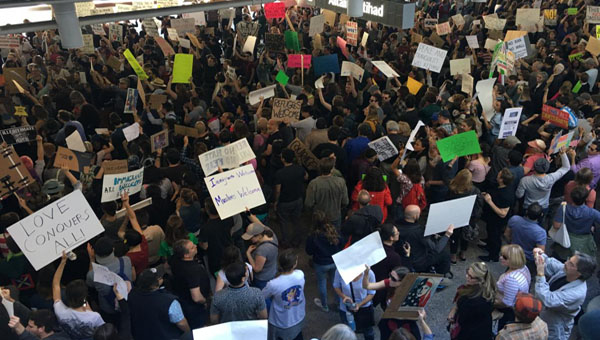 Human Rights Watch staged a protest at the LAX airport, against the US's border policy that discriminates against refugees. Photo credit: HRW.

Canada Must Not Be Complicit In The U.S. Assault On Central American Refugees

U.S. President Donald Trump regularly asserts that the United States is under attack by foreign invaders and that he is the only one willing to stop them. Who are these invaders? Central American asylum seekers, mostly from Guatemala, Honduras and El Salvador.

Amnesty International calls this region “one of the world’s most violent places, with more people killed there than in most conflict zones globally.” Médecins Sans Frontières says that the “violence suffered by people in (these countries) is comparable to the experience in war zones where MSF has been present for decades.”

Much of this violence is caused by criminal gangs, for whom kidnapping, extortion and murder are standard practice. Gender-based violence — including sexual violence and intimate partner violence — is also extremely common. Law enforcement officials in these countries are often complicit in both gang violence and gender-based violence. Even where they’re not complicit, they are generally ineffective in stopping the violence.

Not surprisingly, hundreds of thousands of people have fled these countries, exercising their right to seek asylum.

The Trump administration, however, has done everything it can to discourage these asylum seekers from coming to U.S., despite international legal obligations to provide protection to refugees.

Some of the harsher measures include: forcibly separating asylum-seeking families, detaining children and adult asylum-seekers in inhumane conditions, militarizing the southern border, firing tear gas across the border at women and children asylum seekers, declaring that people facing gang violence or gender-based violence do not qualify for asylum, and, of course, building (or at least talking about building) a border wall.

Inspired by Canada
The United States has even drawn inspiration from Canada in its bid to block the arrival of Central American asylum seekers, using the Canada-U.S. Safe Third Country Agreement (STCA) as a model.

Under the STCA, Canada returns to the U.S. most refugee claimants who present themselves at the border. The United States is seeking to persuade Mexico and Guatemala  to agree to similar arrangements that would allow the U.S. to send asylum-seekers who make it to the United States back to those countries. Absent such agreements, the U.S. has used threats of tariffs to induce both countries to block asylum seekers in transit with the aim of preventing them from getting to the United States in the first place.

The U.S. has also announced that, in contravention of international law, it will no longer provide asylum to most applicants who travelled through any country where they could have sought refugee protection — essentially all Central American asylum seekers.

In all of this, Canada has been remarkably quiet. Under the STCA, Canada continues to turn away Central American refugee claimants who present themselves at an official border crossing. Canada has also initiated discussions with the U.S. about expanding the STCA to cut off other routes into the country involving irregular border crossing.

Nonetheless, Central American asylum seekers who circumvent these barriers and who make it to Canada will mostly be recognized as refugees. According to statistics produced by Canada’s Immigration and Refugee Board, the refugee claim grant rates in 2018 for these countries were: El Salvador, 72 percent; Guatemala, 64 percent; and, Honduras, 57 percent.

So when the Trump administration attacks this group of asylum seekers and denies them protection, they are attacking people who mostly meet Canada’s refugee definition. Canada must not be complicit in these attacks against refugees.

At a minimum, Canada should not be sending refugee claimants from these countries back to the United States under the STCA. The U.S. is simply not safe for them.

But Canada should do more than that.

Canada should stand up for international law by condemning the American assault on this group of refugees.

And Canada should do its part by helping refugees from El Salvador, Guatemala and Honduras get around the barriers that the U.S. is placing in their path by bringing them to the country under refugee resettlement programs.

Francisco Rico Martinez co-authored this piece. He’s the co-director of the FCJ Refugee Centre and a past president of the Canadian Council for Refugees. He came to Canada as a refugee from El Salvador.