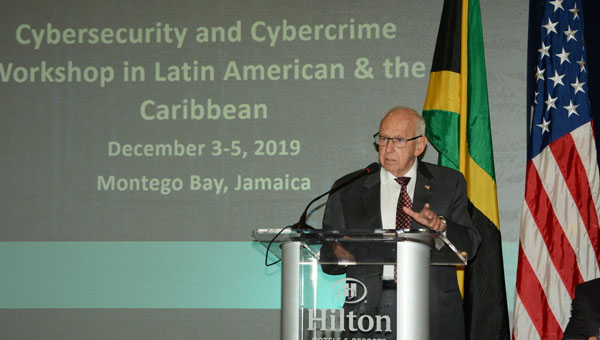 US Ambassador To Jamaica Calls For United Approach In Fighting Cybercrime

KINGSTON, Jamaica, December 11, 2019 (CMC) – The United States Ambassador to Jamaica, Donald Tapia, is calling for a united approach, among nations, to combat the growing problem of cybercrime.

Addressing a cyber-security workshop for Latin American and Caribbean countries in the western city of Montego Bay, recently, he noted that while the Internet has changed lives, ushered in new industries, and provided for greater connectivity at lower costs, it has also brought cyber-related threats.

He said that billions of devices are connected to the Internet, some with relatively little attention to security, while bad actors have become bigger and are better equipped to launch cyber-attacks, and nations have been hard-pressed to keep up.

He noted that banks have been spending billions of dollars on security devices to protect their operations and customers.

“The global reach of the Internet allows individuals, criminal organisations, and even nations, to impact not just the region, but the whole world. Because of the transnational nature of the issue, we must all work together to tackle these shared threats,” Tapia said

Internet growth has obviously brought numerous opportunities for the region [but] we have to be vigilant in our approach going forward,” he added.

Minister of Science, Energy and Technology, Fayval Williams, agreed, citing a 2018 report on cybercrime, which showed that there has been an increase in credit and debit card fraud, locally, as well as identity theft and ransom-related emails.

“These are only a few of the cases that emphasise the need for vigilance, on the part of everyone, and also the need for countries to have a robust cyber infrastructure,” she said.

Meanwhile, Tapia said that the regional workshop represents a significant step in addressing cybercrime, as a national security and economic priority.

He noted that the countries of the Americas have planned several events, throughout 2020, that will “strengthen our mutual national security to advance the security of our citizens”.

“A key element of these programs is to help dismantle transnational criminals and terrorist organisations, while curbing the trafficking of illicit goods and people,” he said.