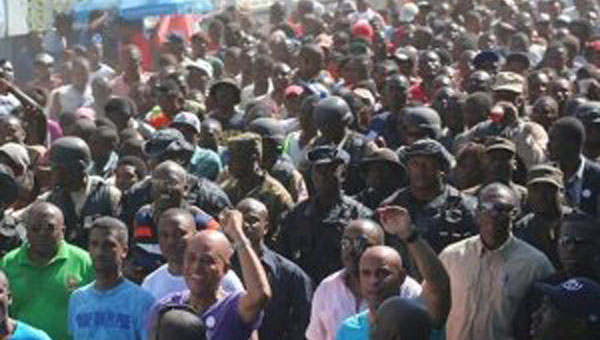 US Urges Citizens To Stay Away From Haiti

PORT AU PRINCE, Haiti, March 6, 2020 (CMC) – The United States has urged its nationals not to travel to the French-speaking Caribbean Community (CARICOM) country of Haiti, because of the high level of crime, civil unrest and kidnapping.

“Violent crime, such as armed robbery and carjacking, is common. Kidnapping is widespread. Kidnappers may use sophisticated planning or take advantage of unplanned opportunities. Victims have included US citizens,” the US Department of State said. in a statement.

It warned that demonstrations, tyre burning, and roadblocks are frequent, unpredictable, and can turn violent.

“Local police may lack the resources to respond, effectively, to serious criminal incidents. Emergency response, including ambulance service, is limited or non-existent,” the statement added.

The Washington statement follows one, issued by the US Embassy, here, urging the Jovenel Moise government, “to meet the needs of the Haitian people, by urgently addressing public security, restarting economic growth, and organizing free, fair, and credible legislative elections, as soon as technically feasible”.

Earlier this week, President Moise, announced the appointment of Joseph Jouthe, as the third person to hold the position of prime minister, since he came to power in 2017. He said the appointment was not coincidental.

“We need men and women soldiers, who go into battle, who will make war for hunger, insecurity and unemployment. Citizens, who will fight smuggling, tax evasion and avoidance, extra-billing, corruption and social injustice.”

Jouthe, a trained civil engineer, is considered an experienced policymaker. He was Environment Minister and interim Finance Minister, and also worked for humanitarian agencies.

“The US Embassy requires its personnel to use official transportation, to and from the airport. Robbers and carjackers have attacked private vehicles, stuck in heavy traffic congestion, and often target lone drivers, particularly women, driving alone.

“The US government has limited ability to provide emergency services to US citizens in some areas of Haiti. US government personnel are discouraged from walking in most neighbourhoods. Only adult family members, over the age of 18, are permitted to accompany US government employees, assigned to the US Embassy in Port-au-Prince,” the Department of State added.