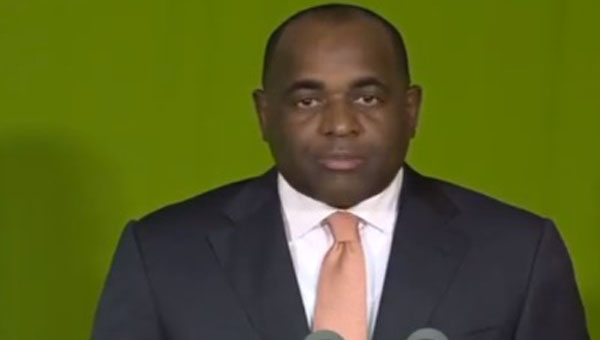 ROSEAU, Dominica, May 18, 2020 (CMC) – The Dominica government says it has spent an estimated EC$22 million in direct costs, so far, in its response to the coronavirus (COVID-19) pandemic, even as it outlined new initiatives to assist nationals, some of whom have lost jobs, as a result of the virus.

Prime Minister, Roosevelt Skerrit, in a nationwide broadcast, on Sunday night, said his administration has had to utilise the funds, even at a time when, for obvious reasons, “our revenues are plummeting” to deal with the COVID-19 that has infected 16 persons, here. Dominica has not recorded any coronavirus-related deaths.

“Similarly, as expected, we have seen a decline in CBI (Citizenship by Investment) revenue. Taxes collected by the Customs Division are estimated to decline by an average of 30 percent, for the months of April to June 2020. Taxes collected by the Inland Revenue Division are projected to fall, by an average of 20 percent, for that same period,” Skerrit disclosed.

He said the loss of revenue, as a result of pandemic that forced a lock-down of the island, must be viewed in the context of a country that is still recovering from the utter devastation, caused by Hurricane Maria, less than three years ago.

“Notwithstanding the negative impact of the pandemic on government’s fiscal situation, the need to address the economic challenges, currently being encountered by many of our residents and businesses, has not been ignored.”

He said that with the assistance with the St. Kitts-based Eastern Caribbean Central Bank (ECCB), the government had engaged the financial institutions to provide relief to customers, from payment of loans, mortgages and credit card debts.

“In most instances, customers have the option to defer payments, for a period of up to six months, and I am advised that many people are taking advantage of that option. We also extended the deadline for the filing of personal and corporate income tax returns, and the payment of income tax was extended by three months for companies with a financial year ending in January 2020 to June 2020.”

He said the government would give consideration to waiving penalties for businesses that enter into payment plans, within six months of the new payment deadline, for amounts, due in respect of the same tax periods.

Skerrit noted that the government is committed to spending an additional EC$10 million, under the Contingency Emergency Response Component (CERC), of the Emergency Agriculture Livelihoods Project, providing support to crop and livestock farmers.

“To assist with meeting the cost of farm labour and other direct costs, cash grants have been approved, to approximately 2,500 individual crop farmers. The amount of these grants is based on the size of the farmer’s holding. Farmers, with small holdings, will receive grants of EC$700, medium holdings EC$1,400 and large holdings EC$2,800. This intervention is valued at EC$3.5 million.”

He added that the government is also putting plans and policies in place, to stimulate other sectors of the economy, especially in the construction sector, which will positively impact employment.

Skerrit said that the government is expecting to sign a number of high-value contracts, over the next few days, while many other projects will begin soon.

“We will also be implementing multiple infrastructure projects, with expenditure of up to EC$100 million.”

Total additional investments in construction are expected to amount to at least EC$296.8 million.

He said that the government will also pay small contractors and merchants, with amounts owed of EC$100,000 and less, in the coming days, utilising the resources approved by the International Monetary Fund (IMF) under the Rapid Credit Facility (RCF).

“The intention is that small contractors will be in a position to resume work on small projects and complete these works in the coming weeks and months. Being mindful of the approaching hurricane season, government will also continue its aggressive housing program and accelerate it, where possible.”

In his broadcast, the Prime Minister said that he had been informed by the Dominica Association of Industry and Commerce (DAIC) that its members have retained their pre-COVID 19 pandemic staff.

“Government has also spoken, directly, with the top largest private-sector employers. I am advised that 88 percent of these employers have held on to their full complement of staff, while the other 12 percent have released 15 percent.

“These employers should be commended, highly, for their stellar contribution to the well-being of their employees and families. They have agreed to hold on, and partner with the government, to ensure the social stability of the country, in these very difficult and uncertain times.”

But he said that the Dominica Hotel and Tourism Association has advised that 2,082 employees have been released from the tourism sector, saying “that figure does not include persons engaged with travel agents and rental companies and some of the other tourism ancillary services.

“Elsewhere, in the less formal private sector, a number of persons are currently no longer engaged, including domestic workers, persons employed at bars, barbershops, day care centres, and salons.”

Skerrit said that heads of families and single persons, who are no longer employed, will receive income support in the amount of EC$600 and EC$400, respectively, for the period April 2020 to June 2020, in the first instance.

He said funding, in the amount of EC$15.7 million, to the affected employees and self-employed will be provided by the government, but will be made available, through the Dominica Social Security, given the administrative capacity that is already in place.

“Additionally, to assist micro and small businesses, including self-employed persons, such as manufacturers, bus drivers, barbers, hairdressers and persons in the tourism sector, to bridge the funding gap, created as a result of the pandemic, government will provide loans, of up to EC$15,000, to micro and small enterprises at an interest rate of one percent.

Skerrit added that access to these funds will be available from May 22.