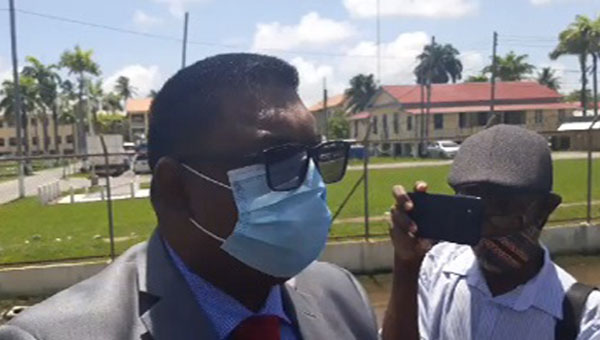 Ali, who was accompanied by his Prime Ministerial Candidate, Mark Phillips, and Opposition Leader, Bharra Jagdeo, told reporters that the discussions were aimed at ensuring a smooth transition of power, after the Guyana Elections Commission (GECOM) makes the formal announcement of the election results, following the re-count exercise that ended on Sunday.

Since the end of the re-count, which is one of four phases to be undertaken before the official result is disclosed, the PPP/C has been saying that it won the elections by a margin of more than 15,000 votes.

Ali said, during the meeting, a number of issues were raised with the Police Commissioner, including security and the need to safeguard government properties.

“You would recall that in 2015 there were police officers stationed at every ministry…whilst the transition was taking place, we raised this with the Commissioner…and we have asked him to ensure that he looks at this, and that systems are in place.

“The third issue is, how do we deal with any eventuality, after the declaration (by GECOM), because there has been many threats ….on social media, and the Commissioner has assured us that they are actively monitoring the situation, they are gathering intelligence, they are securing information to deal with any such threats,” he reported.

Ali said he would not want to identify any of the threats, noting “the police have compiled a list, and he said they are acting on that list”.

But he said that most of those threats are coming from Guyanese nationals residing overseas, and are “trying to divide our people racially…and who have no interest in coming back here, but are bent on creating mischief; and I think it is time the courts deal with those persons”.

Asked by reporters whether or not he was fearful for his life, Ali, a former Housing Minister, replied “I am not a fearful person, I fear God and that’s all I fear. I fear God.

Jagdeo, who told reporters that he expects Ali to be sworn in as the president, next week, referred them to Article 177 (2) (b) of the Constitution, which, he said, states: “once it is established that one list has more numbers than the other list, the head of that list, the presidential candidate on the list that has the majority vote is deemed the president of Guyana and that the Chair of GECOM shall declare him as president”.

He said that particular article of the Constitution “is quite clear”, and “it has been established now that the PPP/C’s list has the most votes and, therefore, Irfaan Ali is already deemed the president of Guyana”.

“As far as we are concerned, all of the shenanigans that are going on now, to prevent that declaration (are) not going to work, because that’s the supreme law of the country,” he added.

Jagdeo said it is imperative that Ali be sworn in, as soon as possible, to deal with the socio-economic situation confronting the country, including reports that the state-owned Guyana Sugar Corporation (GUYSUCO) is experiencing financial difficulties.

“That is why we need the declaration (by GECOM) very early, so we can address these issues,” said Jagdeo, who left open the possibility that he may play a role in Ali’s administration.

“That, you will see next week if there is, but it will be no surprise,” he told reporters.