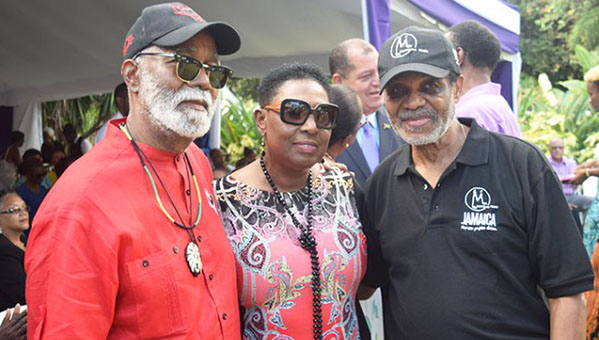 Winston Blake was the chief Architect of the Merritone legacy, which includes being the first Jamaican Sound system to venture overseas, entertaining Jamaicans in the Diaspora and becoming an unofficial ambassador for local music.

Speaking at the Memorial held at Hope Gardens in Kingston, the Minister said, “I want to say thanks to Winston for the music, the passion and the joy that he brought us.”

Minister Grange also used the opportunity to thank the family for allowing everyone present to be a part of the life and story of such an incredible man, a stalwart in the music business.

She further highlighted the influence that Blake and Merritone had on the creative and musical industries, both locally and internationally.

“The many roles Winston and Merritone have played in the production and popularization of Jamaican music is deserving of our sincerest gratitude as a nation,” she said.

The Minister added that as a country, Jamaicans cannot forget or ignore the contributions of the Blake brothers to the growth and development of its entertainment industry.

Recalling memories shared with the musical icon, Minister Grange described Winston Blake as a man of “great wisdom and kindness”.

The Minister also reminded those in attendance that Blake was an individual who, not only created memories, but also preserved them.

She made an appeal to family members, friends and the music fraternity to preserve the legacy and memory of the man who has made such a tremendous contribution to Jamaica’s musical development.

“Winston was an avid collector of memorabilia. He saved almost everything, as his life was a series of magical moments filled with interesting and beautiful people. We need to protect his legacy,” Minister Grange said.

She also expressed the willingness to meet with Monte and the rest of the family in an effort to determine how best the valuable treasure left behind can be utilised.

“We must respect the foundation that he and the other Blake Brothers have already built and merge our efforts to ensure that their pioneering work is not in vain. I hope that we can formulate a lasting tribute to the family, for having built a small, rural sound system from St. Thomas into one of the most important influences on our music over the past six decades,” she added.