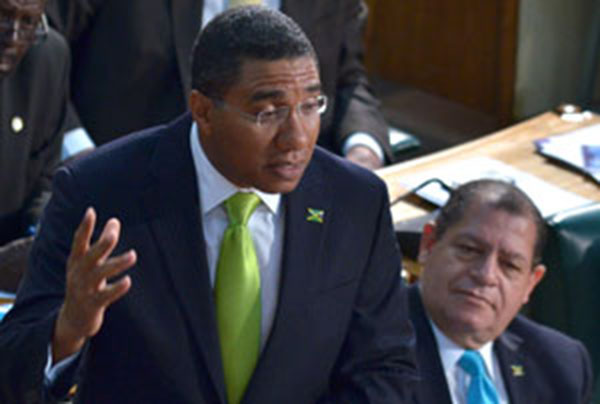 KINGSTON, Jamaica CMC – The opposition Jamaica Labour Party (JLP) will be faced with a leadership challenge for the first time in decades, as Deputy Leader Audley Shaw, on Sunday, announced that he will be entering the race for leadership against JLP leader, Andrew Holness.

After weeks of speculation, Shaw, in a live broadcast, late Sunday, revealed that he will mount a formal campaign on September 29.

“I have now come to the decision that I will allow my name to be entered into nomination for the post of leader of this great 70 year old movement … if it is God’s will and the choice of the delegates that I am to lead this great party, I will do my best to be worthy of your trust and confidence,” he said in a live broadcast.

According to Shaw, at the launch of his formal campaign he will share details of the plans to rebuild the party “along with the policy framework and vision that will guide us into the next general elections when we form the next government.”

In August, Shaw announced his intention to challenge Andrew Holness – a former Prime Minister for the leadership of the party. After advising Holness and other party officials, the former Finance Minister embarked on an island wide consultation.

“In the course of these consultations, I have had several face to face meetings and conversations with members and functionaries of the Jamaica Labour Party and a broad cross section of civil society, business community and grassroots Jamaicans.”

Shaw said the consultations also revealed a lack of motivation and low morale among members of the JLP and functionaries.

“The times we live in require greater participation and re-engagement of the people around the decisions that have to be made to take the country out of the social and economic quagmire in which we find ourselves.”

The JLP Deputy Leader stated that based on his consultations, “These are among the hardest times we have seen in Jamaica. Unemployment is unacceptably high and unemployment among young people is close to 40% despite the fact that the bulk of our population is in the most productive years of their lives…the Jamaican dollar is at its lowest in the country’s history, trading at well over $102 Jamaican to one United States dollar, sending prices through the roof.”

He said the clear message of the consultations pointed to the JLP’s need for “strong, visionary and decisive leadership.”

Shaw who has served the JLP for several years, outlined his achievements, the most recent being his role as Minister of Finance.

“I am proud that as Minister of Finance we were able to maintain a stable currency, restore economic growth, preserver our Net International reserves and initiated the Jamaica Debt exchange. Although we made good progress, we still have much more work to do in order to finish the rebuilding process,” he said.

Shaw sought to assure Jamaicans that the declaration of the leadership challenge is done “With malice towards no one, knowing full well that there must be a place in the Party for everyone, no matter our political antecedents and background, in order to be able to achieve electoral victory and to provide a better and brighter future for all Jamaicans.

“I believe we have a golden opportunity now to show Jamaica, the Caribbean and the world that the party respects democracy internally, because the affirmation of our own internal democracy will make us better able to secure lasing democracy for our country.”

In preparing to launch the leadership battle, the party, a few weeks ago, announced the establishment of a three-member internal electoral commission.

The Commission will be chaired by Queen’s Counsel George Soutar with the other members being Derrick Smith, a veteran politician and Tom Tavares-Finson an attorney at law.

Party officials have said that the election between Shaw and Holness could take place ahead of the party’s annual conference in November.

Holness became party leader and Prime Minister after Bruce Golding stepped down from the positions in the wake of the controversy that surrounded the extradition of Christopher “Dudus” Coke to the United States on drug and gun running charges.

For several weeks it had been rumoured that Shaw would challenge Holness, who has been described by detractors in the party as indecisive and weak.

Disgruntled party members have blamed Holness for the JLP’s crushing defeat in the December 2011 general election/2013.