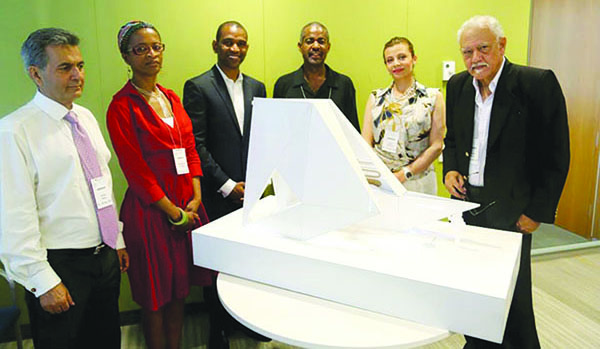 UNITED NATIONS, New York CMC – A Haitian American architect has been declared the winner of an international competition to design a memorial that will be permanently on display at United Nations Headquarters in New York to honor victims of slavery and the transatlantic slave trade.

Unveiling Rodney Leon’s “Ark of Return”, UN Secretary General, Ban Ki-moon, said the memorial would “serve as a reminder of the bravery of those slaves, abolitionists and unsung heroes who managed to rise up against an oppressive system, fight for their freedom and end the practice”.

President of the United Nations General Assembly (UNGA) and Antigua and Barbuda’s UN Ambassador Dr. John Ashe, commended all participants in the competition for “being a voice of change and hope” whose ability to create meaningful artwork “deepens our faith in human goodness and decency, and for this, we are all grateful”.

Leon said his design features a “symbolic spiritual space and object where one can interact and pass through for acknowledgement, contemplation, meditation, reflection, healing, education and transformation”.

He said the competition was “a once in the lifetime opportunity to do something which is going to last generations and has had an impact on so many people’s lives, not only spiritually and emotionally but also in an educational capacity, as well”.

The UN said Leon’s work was selected from among 310 design proposals from 83 countries in a competition launched two years ago by the UN Educational, Scientific and Cultural Organization (UNESCO, with support from the UN Department of Public Information’s Remember Slavery Program, the Caribbean Community (CARICOM) and the African Union.

Jamaica, as the Chairman of the Permanent Memorial Committee, was represented at Monday’s event by Prime Minister Portia Simpson Miller.

“The design will undoubtedly serve to inspire the many persons who will visit the memorial and remind us to never allow such crimes against humanity ever again. We must continue to acknowledge the tragedy and consider the legacy, lest we forget,” she said.

UNECO Director-General, Irina Bokov, said she was “moved” to be participating in the event, given she just returned from Haiti, where the memory of slavery and the slave trade carries precious significance not just of suffering but also of “victorious fight from oppression for freedom”.

The UN said the design had to be created around the theme of “Acknowledging the Tragedy; Considering the legacy; Lest we forget.”

It said the winning design was unanimously chosen by a committee of five international judges who met at UN Headquarters in August.

Ono of the judges, David Boxer, a former curator at the National Gallery of Jamaica, said the real challenge for him was to find a piece that both spoke to the tragedy itself, which he said required a memorial in a “more traditional sense,” and something that is inspirational.

Boxer said he was looking for a piece that looks to the future, that deals with the whole question of hope.

“So it’s how do you combine those two sentiments into a single monument,” he added.