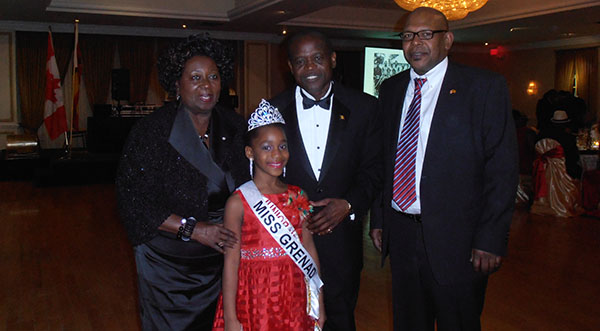 TORONTO, Ontario – Grenada is expected to soon announce the name of a new permanent consul general to Toronto, informed sources have said.

Patricia Clarke was transferred a few months ago from her post at the Grenada embassy in Washington, D.C. to temporarily serve as acting consul general in Toronto to replace Jenny Gumbs, who had taken leave.

Sources, who attended last Saturday’s Grenada independence gala in Toronto, told Pride News Magazine that Gumbs will not be returning to the job as consul general and another female Toronto resident shortly will be appointed to fill the position on a permanent basis.

Many in Canada and United States have spoken highly of the performance and work ethics of Clarke, whose substantive title is counsellor at the Washington embassy and Alternate Representative of Grenada to the Organization of American States.

Reports are that the Grenada government is considering the possibility of appointing Clarke to a more senior diplomatic posting.

Clarke was on the job at Saturday’s gala, sitting at the same table with Elvin Nimrod, Grenada’s Deputy Prime Minister.

Grenadians must be grateful to Gairy, “the dear Father of Independence,’’ after whom a roundabout is being renamed in Grenada, Nimrod said in the keynote address at the gala.

“In expression of gratitude for his life’s work and vision, government has taken the decision to – among other recognitions yet to be unveiled – rename the Tanteen Roundabout and the Botanical Gardens after Sir Eric Matthew Gairy,’’ Dr Mitchell said. “Sir Eric, we salute you.’’

The challenges, which are similarly confronting other Caribbean countries, require unity and working together at the national and regional levels, said Nimrod.

“All of us, at the end of the day, are facing the same problems. We all have to work together and fight together to succeed. By ourselves we cannot survive,’’ Nimrod told the audience that included Grenada’s Honourary Consul to Montreal, Leonard Wharwood; Grenada-born former Canadian MP Jean Augustine; as well as Caribbean diplomats and other citizens from the region now living in Canada.

On the wintry Toronto night, Nimrod brought “warm and fraternal greetings’’ from the government and people of Grenada, including Prime Minister Mitchell.

He said the Grenada government is committed to bringing benefits to the nation and is inviting everyone, including the political opposition and members of civil society, to join the effort.

“We are calling on everyone because we need every hand on board. There is no room for victimization or spite,’’ said Nimrod. “We have to pool our resources to build our country.’’

The unity theme also was emphasized by Mitchell in his Independence Day rally address in St George’s.

“I urge us all to join hands in this effort to continue the revival of our economy; put our people back to work by creating opportunities; pay our bills; and help unleash the entrepreneurial spirit of our youth, thereby reducing dependence on government,’’ Mitchell said.

Although Grenada has not joined the Caribbean Court of Justice, Nimrod said Saturday that he supports the idea of the CCJ replacing the Privy Council in London, England, as the Caribbean’s final court of appeal.

He dismissed suggestions that the Caribbean lacks the personnel capacity to operate the CCJ.

The Caribbean has some of the “best jurists,’’ said Nimrod, adding that he has “the utmost confidence in our people that they can do a good job’’.

Moreover, said the deputy Grenada leader, Britain is “tired with us and they want to get rid of us’’.

The gala, held under the patronage of the consulate general of Grenada in Toronto, was organized by the Grenada Association Toronto, with author and bookstore co-owner, Itah Sadu, serving as MC.