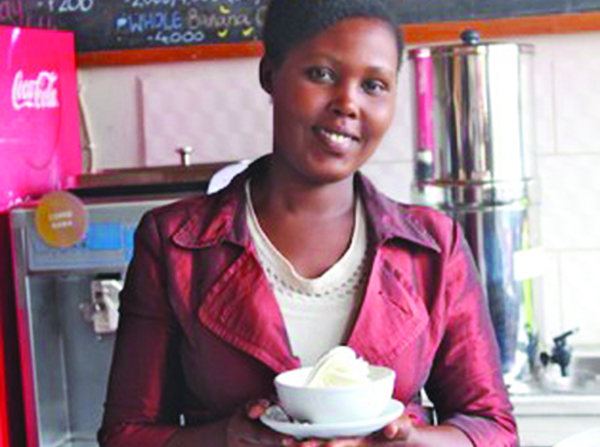 Sweet Dreams Are Made Of Rwandan Ice Cream

BUTARE, Rwanda (IPS) – From all across Rwanda, and even from parts of neighbouring Burundi, people flock to the southern town of Butare to a little shop called Inzozi Nziza or Sweet Dreams. They come here for a taste of something of the unknown, something most have never tasted in their lives — the sweet, cold, velvety embrace of ice cream.

The little store, which has the words “ice cream. coffee. dreams” written across its signage, is milking Rwandan’s curiosity about ice cream for all its worth and “changing lives” in the process, says Louise Ingabire, the manager of Inzozi Nziza.

As she sits at a table in the store, about to devour a honey-flavoured soft serve swirl, Ingabire, 27, tells IPS: “Ice cream is important. I like ice cream because it gives you energy but is also relaxing. Some Rwandans like ice cream but it’s a new thing. We still have some work to do, to tell others that they’ll enjoy it.”

True to the words written across the signage, this store certainly made some of Ingabire’s dreams come true.

“I didn’t have a job before, I just stayed at home. Now I have a vision for the future. I’m making money and I can give some of it to my family,” Ingabire says.

Butare, which has a population of about 89,600 and is located 135 km from the capital, Kigali, is the home of the National University of Rwanda. And Inzozi Nziza has become a social hub for tired students looking to treat themselves to something sweet, cool and different.

“If you need to go out and talk to a friend, a girl or a boy, you come to Inzozi Nziza for an ice cream.” Most of the ingredients for the ice cream are sourced locally, and the milk comes from a depot in nearby Nyanza. The vanilla beans and cocoa are imported.

Inzozi Nziza was opened by theatre director Odile Gakire Katese, aka Kiki. Katese met Alexis Miesen and Jennie Dundas, the co-founders of Blue Marble Ice Cream in Brooklyn, and they partnered together to open Inzozi Nziza in 2010.

“An ice cream shop, [Katese] proposed, might help to put the human pieces back together by rebuilding spirits, hopes and family traditions,” Miesen tells IPS.

At the start, Miesen and Dundas owned the shop in partnership with the women who work there and had shares in the business, which is a cooperative and non-profit. They didn’t set financial targets, but waited for 18 months before they transferred their shares over to the women, who had proved their business credentials.

The success of Sweet Dreams is not an exception. Fatuma Ndangiza, deputy CEO of the Rwanda Governance Board, points out that many small businesses here are owned by women.

“Small businesses are mostly managed by women but when it comes to big business where you have to compete for big tenders, very few women are there. Women are newcomers to big business,” she points out.

“We have more women entrepreneurs. It’s an area where women are taking an interest, both in and outside Kigali.”

While she says that eating ice cream is somewhat new to Rwanda, she’s behind the idea of the store.

“I think it’s great. It requires a lot of skills and changing people’s mindsets because selling and eating ice cream is not [part of our] culture. I think being able to innovate and introduce this on the market, and the process of making it, is quite interesting.”

The Butare shop now employs nine women, all of whom spend their spare time practicing with Ingoma Nshya, the nation’s first and only female drumming troupe, which was started by Katese 10 years ago.

The group is made up of both Hutu and Tutsi women, some survivors of the 1994 genocide, during which close to a million Tutsis and moderate Hutus were killed.

Some members of Ingoma Nshya are widows, some orphans. Others have been affected by the mass murder in different ways.

Historically in Rwanda, women were forbidden to drum and many people considered the drums too heavy for women to carry, says Ingabire.

“It’s something which brings unity,” says Ingabire, who lost her father, two siblings and many cousins in the genocide.

“Some of us are survivors; some know someone who was killed. When I’m drumming with them it gives me power because we’re still alive and survivors.”

Rwanda’s official genocide mourning period, known as Icyunamo, began Apr. 7 and continues until Jul. 4. Within the period the women of the Butare ice cream shop are also marking another symbolic event in their lives – Inzozi Nziza’s fourth birthday in June.

Inzozi Nziza has also been featured in a documentary film made by award-winning sibling filmmakers Rob and Lisa Fruchtman. Sweet Dreams tells the story of the Rwandan women trying to forge a future post-genocide and also features the female drummers.

It has been screened in more than a dozen countries around the world, including the United States and United Kingdom, and in other countries of Europe and in Africa. It will premiere in Rwanda later this year.

“We feel the film is about resilience, hope, bravery, resourcefulness and the ability to change the course of your own life,” Lisa Fruchtman, who won an Oscar for film editing in 1984, tells IPS.